In the early morning, crews were working near Martincoit Road when a 12-to-16-inch water main broke.

“We went to repressurize the line after the repair,” a city worker told FOX 5. 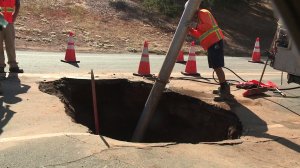 Homeowner Ed Koester said the water flowed right towards his home. But after heavy rainfall in the past, he was prepared.

“It came right down my driveway. For a couple of years now, I’ve had those sandbags in front of my doorway,” he said.

Crews told FOX 5 the sinkhole started out much smaller, but they had to widen it to repair the water main.

“We have to move back the soil in order to expose the area to work on to make the repair,” a worker said.

No customers lost water service and no one was injured.

@cityofpoway crews working to replace water pipe that broke. Have to make a bigger hole to get in & repair. Story on @fox5sandiego pic.twitter.com/amVekHFY2B

SAN DIEGO -- Authorities have identified a 19-year-old driver and his 17-year-old passenger who were killed when their car crashed down a steep hill in an unincorporated area north of Escondido.

The crash happened around 10:30 p.m. April 1 near the intersection of Lawrence Welk Court and Lawrence Welk Drive west of Interstate 15. A San Diego County medical examiner's report says 19-year-old Hugo Alfredo Ramirez Ramirez of Vista was driving at a high rate of speed when his car went off the road and fell several hundred feet down a steep ravine.

PAUMA VALLEY (CNS) - One person died Saturday in a traffic collision involving a gray Lexus and a motorcycle, the California Highway Patrol said.

The crash happened at about noon Saturday on South Grade Road in the Palomar Mountain area, according to a CHP incident log.

EL CAJON, Calif. - One person was killed in a crash early Saturday after California Highway Patrol got reports of a reckless, wrong-way driver on Interstate 8 in East County.

The crash, which happened on I-8 near Dunbar Lane, not far from Lakeside, happened around 2 a.m. In the minutes leading up to the crash, drivers called 911 to report a car weaving in and out of lanes and then driving the wrong way -- east in the westbound lanes of the highway -- according to a CHP incident log.