SAN DIEGO - Cloaked in a thin, regal-looking blanket that signifies him as the Triple Crown champion, Justify did some walking laps in trainer Bob Baffert’s barn area at Del Mar early on Monday morning.

Led from his stall at 7:15 a.m., with a large gathering of San Diego media waiting for him, the spirited chestnut 3-year-old got a bath and afterward reared on his hind legs several times, looking not the least bit lame. 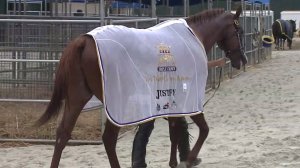 “I think people think he’s in a cast or something,” joked Baffert.

The ailment that has kept Justify on the sidelines since his victory in the Belmont Stakes on June 9 is far from evident. It has been described as a “filling” in his left front ankle. To the equine layman, it’s inflammation that was discovered in a scan.

Baffert said the issue has resolved itself, but he doesn’t know if it will come back, and it has put Justify’s racing future in doubt.

SAN DIEGO -- The old stadium in Mission Valley – The Murph, The Q – soon will be gone. But San Diego sports fans now have a chance to grab their own piece of stadium history.

Sets of seats from SDCCU Stadium go on sale to the public at 9 a.m. PDT online Tuesday. Tens of thousands of seats from the former Jack Murphy Stadium will be available for $329 a pair, up to two pairs. San Diego State University now owns the land and is selling off the memorabilia ahead of a massive redevelopment project at the site.

The wood-bat MLB Draft League is launching with five teams and could add a sixth, MLB said Monday. Teams will play a 68-game regular season that includes an All-Star break that would coincide with the draft in early July.

Farmers Insurance Open to be held in January without fans

SAN DIEGO -- Torrey Pines typically hosts tens of thousands of fans each January for the Farmers Insurance Open, but this year the tournament will take place without spectators.

Monday's announcement that fans will not be allowed at the Jan. 25-31 event because of COVID-19 concerns was disappointing to some but not unexpected, though it would seem of any sport, golf would be the safest for fans to watch. It's outdoors in the open air with no seats and plenty of room.