HOUSTON — It was the greatest comeback in Super Bowl history, led by arguably the greatest quarterback and head coach the NFL has ever seen. The New England Patriots rallied from a 25-point deficit to beat the Atlanta Falcons 34-28 in overtime in Super Bowl LI.

Tom Brady threw for 466 yards and two touchdowns en route to his fourth Super Bowl MVP award — the most by any player in history. New England running back James White added three touchdowns and a game-high 110 receiving yards.

POLL: Did Lady Gaga’s halftime performance live up to the hype? 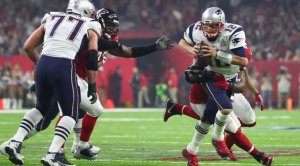 The game looked all but over after the Falcons took a 28-3 lead midway through the third quarter. NFL regular-season MVP Matt Ryan led Atlanta on an eight-play, 85-yard drive that included one ankle-breaking move from Taylor Gabriel that resulted in a wide-open 35-yard catch. Tevin Coleman capped the drive with a six-yard catch, and Atlanta led 28-3.

But then Brady and the Patriots charged back into the game. The future Hall-of-Famer started the rally with a five-yard touchdown pass to White. Gostkowski missed the extra point attempt, but the Patriots defense forced an Atlanta three-and-out, leading to a 33-yard Gostkowski field goal with 9:48 to play. That cut the lead to 28-12.

A minute later, New England’s defense came up big again. Dont’a Hightower sacked Ryan and forced a fumble in Falcons territory. Then five plays later, Brady for Danny Amendola in the end zone from six yards out, and White punched in the two-point conversion to make it 28-20.

Despite Julio Jones making one of the most breathtaking catches in Super Bowl history, the Falcons settled for a punt. That gave New England the ball with 3:30 left and one last drive to tie the game.

And that’s when Brady took over, completing six passes for 90 yards to lead New England down to the Falcons’ one-yard line. Then White finished off the drive with a one-yard plunge to make it 28-26. On the ensuing two-point conversion attempt, Amendola snagged the pass and barely backed across the goal line.

So for the first time in Super Bowl history, the game went to overtime.

The Patriots received the ball first in the extra period, and promptly drove 75 yards for the win. Just 4:52 into overtime, the Patriots faced 2nd and goal on the Falcons two-yard line. White ran up the right side and stretched all the way out to score the game-winner.

The Falcons have lost both of their Super Bowl appearances. They also lost to the Denver Broncos 34-19 in Super Bowl XXXIII.

Sunday’s matchup took a long time to really get going. After a scoreless first quarter, New England’s Julian Edelman kicked off the second with a 27-yard reception from Brady to get the Patriots into Falcons territory. But on the next play, New England running back LeGarrette Blount fumbled, and Atlanta’s Robert Alford recovered the ball.

End zone dances we hope to see Sunday: Who has the most epic celebration?

Five plays and 71 yards later, Devonta Freeman slipped into the end zone to put the Falcons on the board.

The Patriots looked like they were building momentum on their next drive, marching down to the Atlanta 23-yard line. But with 2:21 left in the first half, Alford picked off Brady and returned it 82 yards for the score.

On the next possession, Stephen Gostkowski finally put the Patriots on the scoreboard with a 41-yard field goal that made it 21-3 at the half.

Close
You have been added to 4 p.m. Afternoon News Newsletter

Above-average temps in store this week