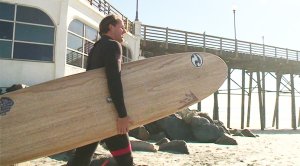 Earlier in December, Jensen clinched his third world title in a rare surf off in Taiwan.

“Pretty much most of the continents that have waves, I’ve been to,” said Jensen.

The 33-year-old’s most recent competition took him to Taiwan, where a whirlwind of events saw him lose in the quarterfinals only to battle for the title in a rare surf-off due to a tie, just the second such scenario in World Surf League history.

“With about a minute to go, I heard I was in the lead and the guy behind me needed to score and at that moment there was a little wave coming. I realized that if I could catch that wave and prevent him from getting a score that I most likely had it,” said Jensen.

Jensen claimed his third world longboarding title, moving him into the record books alongside just two others who’ve accomplished the feat.

“I’m sort of in disbelief and then elation. It’s a rollercoaster of emotions in a situation like that,” said Jensen. 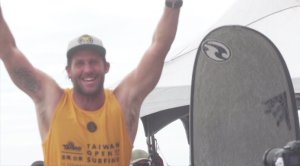 Jensen grew up surfing in Coronado and turned professional at the age of 16. He’s been making a career of it ever since, traveling the world and getting paid to surf.

“I’m just really passionate about it,” Jensen said. “I love surfing. It’s kind of given me everything in my life from my career to it’s how I met my wife. I’ve been able to travel around the world and experience different cultures.”

Jensen plans to continue competing with the goal of a record-setting fourth world title.

WASHINGTON (NewsNation Now) — President Joe Biden will announce Monday that the U.S. will share an additional 20 million doses of COVID-19 vaccines with the world in the coming six weeks, according to a senior administration official.

Reuters and the Associated Press reported that Biden was expected to announce the United States will export 20 million vaccine doses from Pfizer, Moderna or Johnson & Johnson to other countries.

SAN DIEGO (CNS) - The median price of an existing, single-family detached home in San Diego County rose to $825,120 in April, an increase from $800,000 a month ago, mirroring a spike across California that brought the state's median price above the $800,000 benchmark for the first time, a real estate group said Monday.