The Charger campaign begins at the aging Qualcomm Stadium Sunday, September 13 against the Detriot Lions. 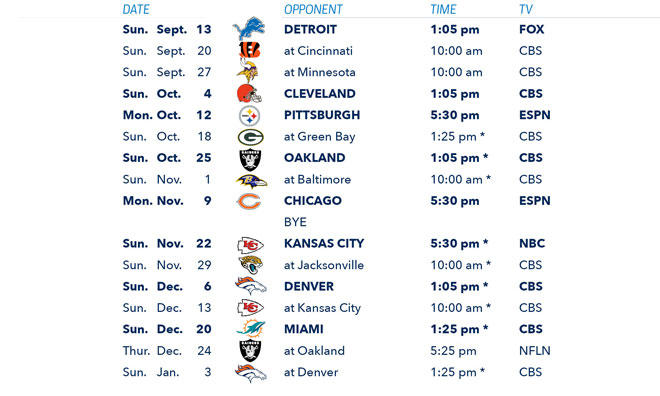 The Chargers’ opponents this fall have been known for a while, but not the order or kickoff times. Preseason times were not released Wednesday, although the Chargers know they will be hosting Seahawks and visiting 49ers.

The team will play three home football games in prime time this year, a season that could turn out to be the team’s last in San Diego.

The Chargers have recently made moves to acquire land in the Los Angeles suburb of Carson on which to build a stadium jointly with the Oakland Raiders.

The Chargers, who have been pushing to get a new playing facility built in San Diego for more than a dozen years, will play three of their final four games out of town.

A task force has been studying how to finance a new stadium in San Diego and is due to issue recommendations by May 20. If the Chargers don’t like the plans, they can opt out of their contract with the city to play at Qualcomm Stadium early next year.

SAN FRANCISCO (AP) — Trent Grisham hit a game-ending three-run homer with one out in the seventh inning, lifting the San Diego Padres to a 6-5 victory Friday and a doubleheader split with the San Francisco Giants after ace Dinelson Lamet left the game with an apparent injury.

Projected No. 1 playoff starter Lamet became the second Padres pitcher to go down injured in three games. No update was given before the game ended.

Clevinger gets shot, Padres hope he can pitch in playoffs

San Diego pitcher Mike Clevinger got a cortisone shot for his ailing right elbow Friday and the Padres are hopeful he'll be OK for the playoffs.

Clevinger, acquired last month in a big trade with Cleveland, left his start against the Angels on Wednesday after just one inning.

SAN DIEGO - The San Diego Loyal will forfeit its midweek match against LA Galaxy II after the team says a Galaxy player called one of its players a racist slur during the game.