SAN DIEGO -- Seventy-six local World War II vets spent the weekend visiting memorials in Washington D.C. dedicated to their sacrifice. For some, the best part of the weekend was coming home to a major crowd.

When they landed at Lindbergh Field, a crowd of nearly a thousand family and strangers, military and civilians, were ready to thank them.

For some, the best part of the weekend was coming home to the crowd. Freddy Warner, He joined the U.S. Navy 73 years ago in San Diego, broke down when he saw his daughter Shannon. 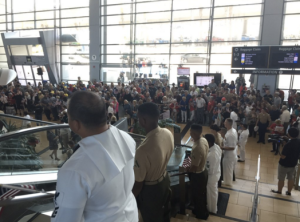 Warner waited three years to go on the trip and confronted many haunting memories when he was there.

"I had a lot of bad memories over there, but that's in the past. All these people remembered us that's what meant most to me," said Warner. "Nothing can compare to this."

He created new memories Sunday, seeing his family and hundreds of people he's never met. They gave him the welcome home he says he never had.

Honor Flight San Diego is the group that puts together the trips. Their spokeswoman says a thousand World War II vets die every day in the U.S., so it's a priority to send them on the trips. They encourage people who are interested in contributing to go to their website.

MOUNTAIN CENTER, Calif. (KTLA) -- More than 200 firefighters have been called to battle a wildfire that broke out near Idyllwild in the San Jacinto Mountains of Riverside County overnight.

The blaze, dubbed the Bonita Fire, began about 1:15 a.m. in the 28000 block of Bonita Vista Drive in the Mountain Center community, according to an incident update from the Riverside County Fire Department.

LOS ANGELES (KTLA) -- COVID-19 has impacted nearly every industry worldwide, and at this year's all-digital CES, it's influence was everywhere, with plenty of gadgets trying to protect us from this devastating pandemic.

"Health and wellness has always been a category that CES explores, but it’s taken on a whole new meaning," explained Connie Guglielmo, Editor in Chief at CNET.