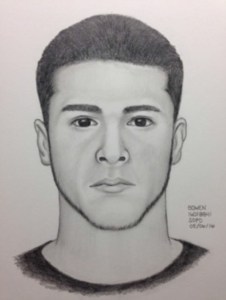 The victim told investigators that she was walking  in the 1600 block of 8th Avenue toward her car, which was parked on 9th Avenue at about 9:45 when a man approached her. He pulled out a knife and threatened to kill her if she didn't walk with him into Balboa Park. He raped her in a remote area of the park and then forced her to walk with him back to the 1600 block of 9th Avenue. He forced her into the outside area of an apartment complex, where he sexually assaulted her again.

When a passing driver saw the attacker walking on the street, the man tried to cover his face with his shirt. The driver then saw the victim come out of the apartment complex and stopped to help her.

The woman described her attacker as a man who appeared to be in his 20s, with short, slicked-back black hair, a thin beard along his jawline, wearing dark blue pants, a dark T-shirt, black work boots and a piece of black cloth over the lower part of his face. The victim also said her attacker has tattoos on both forearms and on his chest.

Anyone with information about the suspect is asked to call San Diego police at 619-531-2000.