SAN DIEGO -- A woman testified Tuesday that a Lyft car she and two girlfriends were riding in was struck from behind and the driver killed after he pulled over on state Route 94 near downtown San Diego to tend to a sick passenger last fall.

Kelly Hoffman testified as a preliminary hearing got underway for Steven Quintero, who is charged with murder, gross vehicular manslaughter while intoxicated, DUI and driving on a suspended license in the Oct. 1 death of 41- year-old Henry Reyes of Escondido.

Hoffman testified that she and her two friends were dropped off about 11 p.m. on Sept. 30 and had drinks at a couple of downtown nightclubs before stopping for some gelato.

As they headed home about 1 a.m. in the Lyft car driven by Reyes, Sarah Smith got sick and the driver pulled onto the shoulder of the eastbound freeway near 28th Street to get her out of the car and give her some water, Hoffman testified.

Minutes later, the Lyft car was hit from behind and Reyes -- an aspiring dentist and the father of a 2-year-old child -- was killed as he walked around the car to get back in.

"I was hit so hard I didn't know where I was," said Hoffman, who was on the phone in the backseat when the collision occurred. "I told the (911 operator) I was in Clairemont. I don't know why I said that."

Hoffman testified that she had a broken bone of the top of her foot, whiplash of the neck and a concussion.

Smith, who had cuts to her chin, a neck injury and a bruised spine, said she has no memory of the crash. 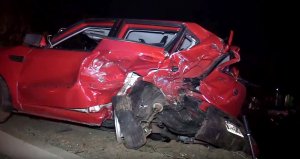 At Quintero's arraignment, Deputy District Attorney Cally Bright said the murder count was warranted because a previous charge of driving under the influence was filed against the defendant in November 2015, and because he allegedly left the scene of the fatal crash.

At the conclusion of the preliminary hearing, which resumes Wednesday, Judge Joan Weber will determine whether enough evidence was presented for Quintero to stand trial. He faces 29 years to life in prison if convicted.

SACRAMENTO, Calif. (CNN) -- The state of California is partially shutting down again — a huge blow to the fragile U.S. recovery logged in recent months.

US carries out 1st federal execution in nearly 2 decades