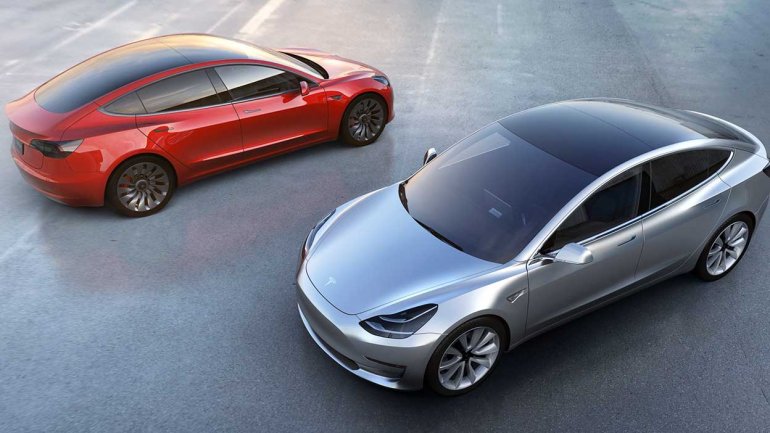 When the Model 3 was unveiled to great fanfare in April, 2016, 350,000 people raced to put down $1,000 deposits for one in the first week. The first customer deliveries of the Tesla Model 3 will doubtless gain far more attention than the first deliveries of Chevrolet Bolt EVs got seven months ago.

“This is a seminal moment for EVs,” said Jeremy Acevedo, an analyst with the automotive Web site Edmunds.com.

If even half of the people who put down a deposit on the Model 3 actually buy one, then this car alone will give a huge boost to EV sales, he pointed out. There were 78,000 electric cars sold in the U.S. last year, over half of which were Tesla Model S sedans and Model X SUVs. The Model 3, just by itself, could easily double or even triple electric vehicle sales in the U.S. if Tesla can ramp up production.

Getting more electric cars on the road should help with the broader acceptance of the technology, he said. That should be good, not just for Tesla, but General Motors, Nissan and other automakers who sell electric cars.

But there’s no guarantee. Consider the Toyota Prius hybrid car. In the early 2000s, when the Prius went on sale in the United States, hybrid technology was not well understood or accepted by consumers. But ultimately, the Prius was a huge hit for Toyota, quickly becoming one of the best-selling cars in its line-up.

But that success never translated into long-term success for other hybrids, says Jake Fisher, head of auto testing for Consumer Reports. In the end, the Prius was more of a one-hit hybrid wonder than the beginning of a trend.

Rebecca Lindland, an industry analyst with Kelley Book, argues that the glass is half full and not half empty.

She says that a lot of hybrids posted moderate sales thanks to the Prius. Those other models might have failed completely, or might never even come to market, if the Prius — which is a Latin word meaning “to go before” — had not led the way.

The same will happen with the Model 3, according Lindland who put down a $1,000 deposit for one of the cars herself.

“The Model 3 will help with the neighborhood effect for electric vehicles,” she said.

The more Model 3s there are in driveways, the more inclined other folks in the neighborhood will be to buy an EV themselves.

Some of shoppers people might decide a Tesla isn’t for them because they don’t want to trust a start-up automaker. Instead, they’d prefer to buy from General Motors or Nissan. But they’ve gotten the idea that they might own an EV.

Not only does the Model 3 have to contend with competition from established automakers that already have solid sales and repair operations in place. It will also have to contend with incredibly high customer expectations — perhaps unrealistically high. That’s because many Model 3 buyers undoubtedly expect to get the kind of luxury and performance of the more expensive Model S. Tesla has been clear that this won’t be the case, but the luxury brand that the company has already established could pose a problem.

Additionally, Tesla has not earned a stellar reputation for reliability. Buyers of a mass-market sedan will probably be a lot less forgiving when it comes to glitches and breakdowns than early adopter luxury car buyers.

If the Model 3 fails, it will be a huge blow to the electric car market, said Acevedo.

“For Tesla and the EV market, this lightning in a bottle,” he said. “You can’t let this fizzle. This is showtime.”