SAN DIEGO – An approaching storm appears to be bringing rain to San Diego Sunday into Monday, according to FOX 5 meteorologist Jason Handman.

While it’s not unusual for San Diego County to get a storm in May, here’s what Handman says stands out about this system: 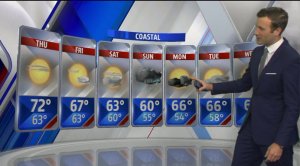 Temperatures will drop drastically. Highs on Sunday will top out in the upper 50s to right around 60 degrees across most of San Diego.

This storm is looking to bring rainfall that exceeds the normal amount for the month of May.

There is the potential for a few thunderstorms.

The mountain areas could see snow showers out of this Sunday morning, but it is unlikely to see any accumulations at places like Julian or Mt Laguna.

Here’s a potential timeline for the stormy weather:

Cooler with increasing clouds late in the day

Still nice, but cooler. Normal high temps for this time of year

Mostly cloudy at the beaches and inland areas

Cooler with drizzle at the coast

Increasingly windy, strongest winds will be Saturday PM with gusts 40-60 mph, strongest in the typically windy spots up through our Mountain areas

Saturday night showers will start in the mountains, with a few snow showers mixing in as snow levels drop early Sunday

Showers and isolated t-storms, with snow showers in the mountains

A few showers, still the potential for an isolated t-storm, but at this point Monday looks drier than Sunday

Mostly cloudy could still be a few spotty showers

Around 0.25 – 1 inch of rain along the coast and inland areas.  Could be some higher amounts if t-storms develop.

A normal May has San Diego getting 0.19-inches of rain (not much).

May is typically the fourth driest month of the year for San Diego with the driest month being August at 0.05-inches.

Average high for this time of year in San Diego is 68 degrees. In Escondido, it’s 73 degrees.

That’s an early look, things will change as we get closer, Handman said. Download the FOX 5 San Diego app and get updates on the weather in your area.