EL CAJON, Calif. – Crews were working on a water main break that caused a road to collapse in El Cajon Thursday. 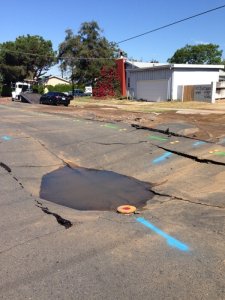 The water main break happened on Madison Avenue near Orlando Street, between Roselle and Wayne Avenues, between 1st and 2nd streets, just east of the Boys and Girls Club, according to city officials.

The break occurred at about 8 a.m. and damaged a large portion of the roadway on Madison Avenue. The road will remain closed until all the work is completed, which was estimated to be 9 p.m.