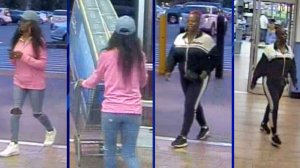 The suspected commercial burglary and grand theft case happened at about 6 p.m. on Feb. 25, 2017 in the 1500 block of Leucadia Boulevard, when two women were seen on surveillance video walking out of the store with two Samsung 55-inch televisions, according to sheriff's Detective Jaime Rodriguez.

"They did not make any attempt to pay for the items as they exited the store," Rodriguez said. "The total value of the stolen TVs is about $1,600."

The first suspect was described as a black woman, about 35 years old, 5 feet 6 inches tall and weighing about 155 pounds. She had long, straight, black hair and was last seen wearing a blue baseball cap, pink sweatshirt, blue jeans and white high top tennis shoes, according to Rodriguez.

The second suspect was described as a black woman, about 30 years old, 5 feet 4 inches tall and weighing about 185 pounds. She was last seen wearing a blue and white sweat suit and black tennis shoes, Rodriguez said.

Anyone with information about the suspects or the alleged crime were asked to call the North Coastal sheriff's station at 760-966-3500 or the Crime Stoppers anonymous tip line at 888-580-8477.