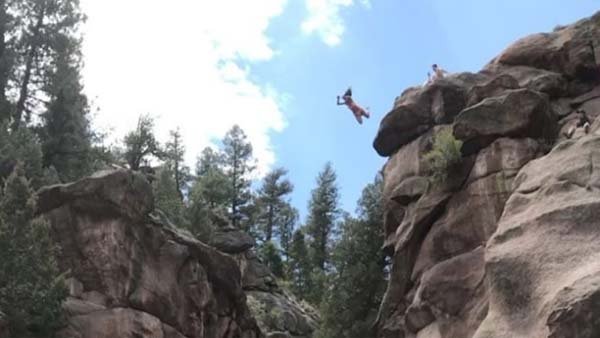 DENVER — Emergency responders airlifted a woman to the hospital after she belly-flopped while attempting an 83-foot cliff dive in Colorado over the Fourth of July holiday, according to KDVR-TV.

Rachel Dukich, of Denver, recorded the incident at Paradise Cove Cliff near Florissant in Teller County, west of Colorado Springs.

She said the woman was reported to have a bloody nose and was “highly disoriented” after the dive.

“I think she jumped out far to be sure to clear the rock face and found herself in  superman and instead of pulling her legs in to straighten out, she panicked, froze, and flailed,” Dukich wrote.

A Flight for Life helicopter was brought in to take the woman to a hospital. Her name and her condition have not been released.

Witnesses have posted videos on social media warning other cliff divers to use caution and to be careful.

MOTZA, Israel (AP) — An Israeli jewelry company is working on what it says will be the world's most expensive coronavirus mask, a gold, diamond-encrusted face covering with a price tag of $1.5 million.

The 18-karat white gold mask will be decorated with 3,600 white and black diamonds and fitted with top-rated N99 filters at the request of the buyer, said designer Isaac Levy.