LOS ANGELES — A grimacing Bart Simpson scrawls the phrase “BEING RIGHT SUCKS” over and over again on a classroom chalkboard in the open to the latest episode of “The Simpsons.”

The tease was produced as a response to a 2000 episode, which predicted a Trump presidency. 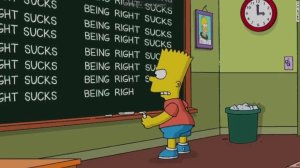 “Bart to the Future,” produced over 16 years ago, was a look into main character Bart Simpson’s future. Bart is depicted as a failing musician, while his sister, Lisa Simpson, becomes the first female president following her predecessor — Donald J. Trump.

“We’re broke,” a member of her staff says, as he holds a board with tanking trends.

The episode was written as a “warning to America,” show writer Dan Greaney told The Hollywood Reporter.

“And that just seemed like the logical last stop before hitting bottom. It was pitched because it was consistent with the vision of America going insane.”

The show also predicted a woman will follow Trump. Will they be right again?

James Campbell, a former professional javelin thrower, spent his 32nd birthday on Wednesday doing 6-meter (20-foot) shuttles from one end of his small backyard to the other after promising to run a marathon if one of his Twitter messages received 10,000 retweets.

“We decided the best course of action was for me to isolate myself from them once I started working in the emergency department,” said Dr. Osborn.

AUSTIN, Texas (KXAN) — It was an emotional scene at St. David's South Austin Medical Center after a patient recovered from COVID-19.

The 44-year-old woman was met with a line of hospital workers and a chorus of cheers as she was wheeled out of an elevator and released from the hospital.