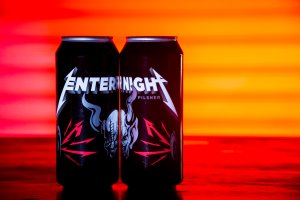 The beer, which launched in the United States and will be available internationally in the spring, was described as a traditional Northern German pilsner.

“Enter Night Pilsner is a unique expression of the shared values that have helped define Metallica and Stone Brewing: fiercely independent, transcending genres, shattering preconceptions and challenging convention,” according to a news release by Arrogant Consortia, the company who owns Stone Brewing. “An intensity of vision combined with a shared middle finger to the status quo makes Enter Night Pilsner a chorus of collaboration worth celebrating.”

The members of Metallica and the leadership of Stone participated at every step. Throughout the process, they would meet backstage at shows, Metallica’s Bay Area headquarters and the brewery headquarter in San Diego.

Metallica’s Lars Ulrich and Stone co-founder Greg Koch met on multiple occasions at Lars’ home to “discuss” beers, according to the release.

“I remember seeing Metallica on the cover of a magazine just after the Black Album was released,” Koch said. “On the cover was a quote that resonated with me to this day: ‘Metallica didn’t go to number one, number one came to them.’  I loved what that meant. Do it your way and never compromise your art. If you’re great at what you do people will come. I view that simple quote as one of the founding philosophical elements of Stone Brewing.”

Seventeen-year-old Jessica Baggen disappeared in Sitka, Alaska in the early morning hours of May 4, 1996, according to a Facebook live from the Alaska State Troopers. She had just celebrated her 17th birthday at her sister’s house along with another friend. Jessica then walked home alone after the party shortly after midnight.

HICKMAN COUNTY, Tenn. (WKRN) — A trip to the DMV is usually a tedious process, but a Tennessee woman is laughing about her most recent experience.

“I was with my Mom and we were going to eat lunch, and I said, 'You need to see this. This isn’t right,'” Jade Dodd said.

SAN DIEGO -- Get ready for an all-natural light show in Tuesday's sky -- the Perseid meteor shower.

It's the northern hemisphere's most popular meteor shower of the year. The shower has been active since July but is set to peak this Tuesday night into Wednesday morning.