MALIBU, Calif. – City officials say a sign posted on Pacific Coast Highway in Malibu that drew quite a bit of attention was a mean prank, the Los Angeles Times reported. 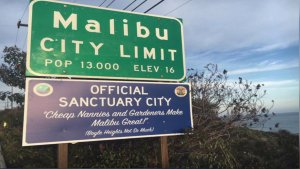 Malibu city officials said the sign was not put up by the city.

A California State Parks employee reported the sign to authorities Tuesday, Malibu Councilwoman Laura Rosenthal said. The sign had already been taken down by the time deputies showed up to investigate.