SPRING HILL, Tenn. – A Tennessee firefighter found out just how dangerous a rattlesnake can be even with its head cut off.

Kyle Watson was evacuated by helicopter from a remote trail at the Creeks Bend Natural Wildlife Area in Maury County, when he came across a juvenile timber rattlesnake while hiking with his wife and three children, according to Nashville-area television station KSMV.

There were a number of people on the trail at the time. Watson was concerned that hikers would be in danger with the rattler so close to the trail. 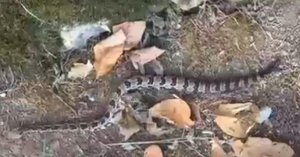 “I decided to cut the head off the snake with a kayak paddle,” Watson told the station.

The snake was only a few feet long. After Watson decapitated the snake, he wanted to show his children the head. Unable to pick the snake’s head up with the paddle, Watson used his hand.

What happened next could only be described as terrifying.

“The head turned and struck me on the finger. It latched on and I slung it off,” Watson said.

The snake packed a poisonous punch, and venom began to course through his body.

“It took about 10 seconds for the burning sensation to start shooting through my arm. Within 60 seconds, I was unconscious. I fell on the trail and hit the back of my head on a rock. I was knocked out. In a remote area, bleeding from the head and bitten by a snake,” Watson said.

Following a quick response by Maury County Fire and Emergency Medical Services, Watson was stabilized in the field.

He was flown to Vanderbilt Medical Center, where he was quickly put on an IV drip of anti-venom serum.

A toxicologist with Vanderbilt Medical Center told KSMV the only treatment that can save someone bitten by a poisonous snake is anti-venom serum.

Man runs into burning building to make sure everyone was out

ASHEVILLE, NC (WLOS ) -- Multiple residents are displaced from their homes after a fire at an East Asheville apartment Friday.

Man and dog travel the country side by side during quarantine

LE CLAIRE, IA (WQAD ) -- Whether it's a spouse, a sibling, or a parent, lots of people have spent time with their "quarantine buddy." But one Iowa man keeps his right by his side.

SARATOGA SPRINGS, N.Y. (NEWS10) - From drive by-birthdays to virtual get-togethers, many have found ways to celebrate during this pandemic. One man is looking to make a unique and memorable impact on the youth and does just that with a little help from his superhero friends.

Whether you’re seeing Batman, Bumblebee or Iron Man, it's Saratoga County resident Dave Stumpf who’s the hero behind the mask.