FRESNO, Calif. – A California woman’s mugshot has received international attention this week after she was arrested on gun charges.

Mirella Ponce, 20, was arrested Monday during a traffic stop. According to the Fresno Police Department, Ponce is a TRG gang member and had a loaded firearm. She was with her infant child and two other gang members when pulled over, police said. Ponce was booked in the Frenso County jail. 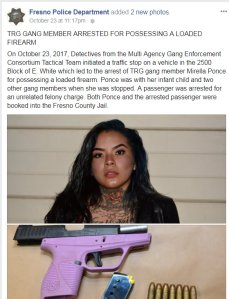 Regardless of the charges, when Ponce is released from jail, she may have to fend off numerous admirers.

A mugshot of Ponce appeared on the FPD Facebook page and it garnered attention across the globe.  Some professed their love, while others were in disbelief that a mother would allegedly put a baby in harm’s way.

“The only crime she committed was stealing my heart,” one man posted.

“Those are the best looking eyebrows I’ve seen on this page,” another person commented.

“Sad no one is understanding she put her child’s life in danger.. But are excited about her looks.. Are you kidding me?” one commenter posted.

Some pondered if Ponce was the new “hot felon” — taking after Jeremy Meeks.

BEAVERTON, Ore. (AP) — A car thief who found a toddler in the backseat of a stolen vehicle drove back and chastised the mother for leaving the child unattended before taking off again, police in Oregon said.

The woman went into a grocery store about 15 feet from the car Saturday, leaving her 4-year-old child inside with the engine running and the vehicle unlocked, said Beaverton police spokesman Officer Matt Henderson.

DENVER (KDVR) — A teacher in Denver recently confronted a porch pirate who paid a visit to her home, and it was caught on video.

(NEXSTAR) - In a new interview, Harvard physicist Avi Loeb says there's a "serious possibility" that an interstellar object that passed through Earth' solar system could be an alien spacecraft.

Scientists, who discovered the object in 2017, call the mysterious entity 'Oumuamua. The scientific consensus determined 'Oumuamua to be of natural origin, but Loeb disagrees. In his new book "Extraterrestrial: The First Sign of Intelligent Life Beyond Earth," he argues that the interstellar mystery object was likely similar to a light sail — a method of spacecraft propulsion — created by extraterrestrials.