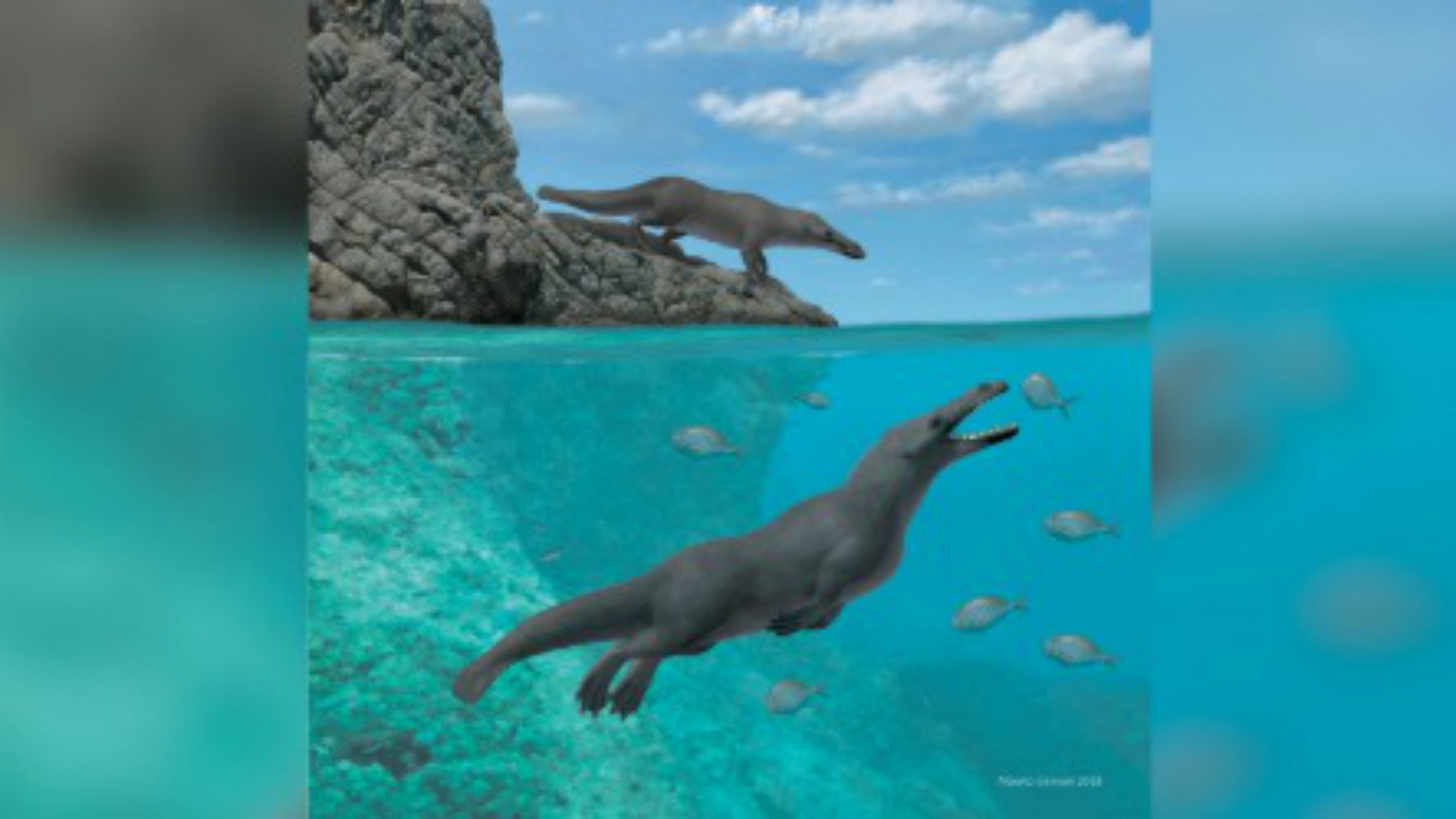 SAN DIEGO — The whales we know today look nothing like they did millions of years ago.

Instead, cetaceans, the group including today’s whales and dolphins, evolved 50 million years ago from small four-legged animals with hooves.

Rather than being one of the largest creatures on Earth, as they are now, they came from creatures the size of an average dog.

Paleontologists have discovered skeletons of these early creatures in India and Pakistan, but this new find, as discussed in Thursday’s edition of the journal Current Biology, was found in the Pisco Basin on the southern coast of Peru.

The 2011 find by Mario Urbina and his international team contained several surprises.

“As this is the first four-legged whale skeleton for South America and the whole Pacific Ocean, the discovery in itself was a major surprise,” study co-author Olivier Lambert wrote in an email. Lambert works at the Royal Belgian Institute of Natural Sciences. “We were also surprised with the geological age of the find (42.6 million years ago) and with the preservation state [of] so many bones from most parts of the skeleton, even including a patella (kneecap), some small ankle bones, and the last phalanges with marks of tiny hooves.”

This is the oldest known whale found in this part of the world, and it is the most complete skeleton anyone has ever found outside India and Pakistan. This particular creature would have been up to 4 meters long, or 11 feet, tail included.

The team that found it named it Peregocetus pacificus. It means “the traveling whale that reached the Pacific.”

Scientists had known the whales’ body shape had changed over the years, making the creatures better adapted to life in the water; however, they didn’t know how the creature had moved from South Asia to South America. Early whale ancestors were not fully aerodynamic like whales are today.

“Four-legged whales, the ancestors of nowadays whales and dolphins, have been previously found in three main regions: the geologically oldest come from India/Pakistan, somewhat younger taxa [the plural of taxonomy] were described from North and West Africa, and even younger ones from the east side of North America,” Lambert said. “Based on the available evidence, and on the fact that the postcranial skeleton is poorly known in species from both Africa and North America, several questions remained debated: When did quadrupedal whales reach the New World? Which path did they take? And what [were their] locomotion abilities during that long travel?”

This 2011 discovery confirmed the animals were probably good swimmers and good at getting around on land.

Unfortunately, scientists did not find the last part of the tail section of this creature, but the first vertebra connecting this section of the bones was similar to what modern-day beavers and otters have.

The ancient whales also had long toes that were most likely webbed, meaning they moved a lot like today’s otters. That’s probably how they crossed the Atlantic Ocean, researchers said. Today, a giant otter-type creature would have to swim a long way to migrate, but at that time in the Earth’s history, the distance between Africa and South America was two times shorter and the currents were strong.

From South America, they probably migrated to North America, as well. They probably didn’t become fully marine animals until about 12 million years after this creature roamed the Earth, scientists think.

There are many intermediary stages of this “spectacular evolutionary history” that have been found over the years, “but we still miss elements, so we should keep searching in other parts of the world, especially in the Southern Hemisphere, for skeletons of these strange four-legged whales, to make the whole scenario better understood,” Lambert said.

Scientists will continue to dig in this area in Peru. They hope to find bones that may be even older so that they can fill in more pieces of this puzzle about how the whale evolved over time.

“A skull would be great, as well as the tip of the tail,” Lambert said.

Emily Visnic, in West Palm Beach, Florida, was about to load her washer when she saw snakeskin, WPEC reported. She figured it was snakeskin clothing, so she reached inside the machine.

Second stimulus checks: Where we stand as a new week begins