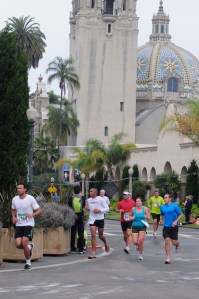 The 13.1-mile race begins at 7 a.m. at Cabrillo National Monument at the tip of Point Loma. The course winds down to the Embarcadero and downtown San Diego before winding up in Balboa Park.   Participants have been instructed to park in Balboa Park and take a shuttle bus to the starting line. Private vehicles will not be allowed onto monument property before the race.

The 5K course is entirely within Balboa Park. It begins at 6:45 a.m.

The race comes nearly one week after researchers determined that races like this had a $64.1 million economic impact on San Diego last year, with 134,000 participants in 66 events. More than one out of three entrants were visitors from outside San Diego County, coming from all 50 states and about 22 countries, bringing new money into the region, according to the report.