SANTEE, Calif. -- Investigators are asking for the public's help in identifying and locating a man suspected of identity theft.

On August 21 and 22, the man used a Santee resident's credit card number to make about $900 worth of unauthorized purchases at three businesses: Shell Gas Station at 5302 Lake Murray Boulevard in La Mesa, Sarku Japan Restaurant at Fashion Valley Mall and Travel Mart at 1201 Hotel Circle South in San Diego, according to investigators with the Santee Sheriff's Station.

The victim says she never lost her credit card and doesn't know how her personal information was stolen.

The suspect is described as a white man between 20 and 30 years old with short brown hair and unshaven. He was last seen wearing dark sunglasses, a dark "Lucky Brand" T-shirt, plaid shorts and dark skater-style shoes.

The clerk at Travel Mart says the suspect presented a pink out-of-state driver license and was accompanied by a black man with short hair and a pink collared shirt. The man was also seen with the suspect at the Sarku Japan restaurant. 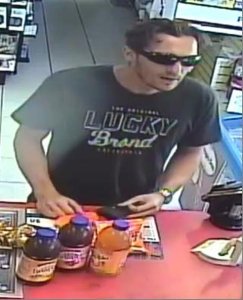 Surveillance video from the gas station shows the suspect getting into the back seat of an unknown make/model white, four-door SUV. There may have been two other people inside the car.