SOLANA BEACH, Calif. – A man suspected of stabbing a worker at a Rubio’s restaurant in Solana Beach died Monday after he was shot during a confrontation with deputies near the Del Mar Fairgrounds.

The shooting took place in the 3200 block of Camino Del Mar in Del Mar about 4:30 p.m., about four blocks away from the fish taco shop where the man allegedly stabbed another man in the face about 30 minutes earlier.

The stabbing victim was taken to a hospital for treatment and was expected to survive his injuries, San Diego County Sheriff’s Lt. Greg Rylaarsdam said. 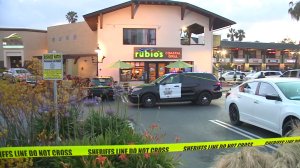 The events that led to the shooting began at about 4 p.m., when deputies were sent to Rubio’s Restaurant at 437 South Highway 101 to investigate a stabbing. Witnesses described the attacker, and deputies located a man matching the description a short time later several blocks south of the restaurant.

“When they contacted the suspect, who was still armed with the knife, a confrontation followed which culminated in a deputy-involved shooting,” Rylaarsdam said.

Medics took the suspect to a hospital for treatment of wounds, but he later died, Rylaarsdam said.

Authorities closed traffic lanes around the site of the shooting and suspended train runs through the area to allow investigators to document evidence.

The identities of the people involved were not released.

[CORRECTION: This story originally reported the stabbing victim had died. ]

SAN DIEGO -- A fugitive is dead after an hours-long standoff at San Diego High School ended with two officers opening fire on the suspect.