SAN DIEGO - A thief is still on the loose a month after $400 worth of goods were stolen from a day spa in the College area. 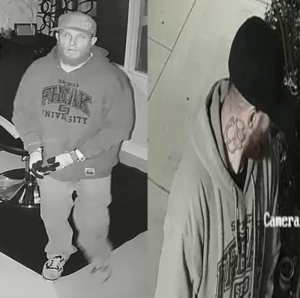 On April 3 around 2:35 a.m., police say the man broke into Day Spa in the City  on the 6900 block of Alvarado Rd. The thief took $400 worth of hair products as the business' surveillance cameras were rolling.

The suspect is described as a white man in his mid-20s. He's about 5'11" to 6 feet tall and weighs about 180 lbs. He has red hair and a red beard. He is seen wearing a black Metal Mulisha baseball  hat and gray hooded sweatshirt with "Speed Freak University" on the front. He also has a possible brass knuckle tattoo on the left side of his neck.

Police also say the possible getaway vehicle was a four-door black Chevrolet Silverado with black oxidation to the roof and stickers on the upper corners of the rear windows.