SAN DIEGO – A pickup truck was stuck in a sinkhole and homes were damaged after a 12-inch water line broke in Mountain View, just north of National City, Wednesday morning, police said. 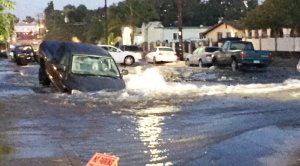 The water main break happened at 4 a.m. at Delta Street and Scott Drive.

Several homes were flooded, including at least four apartments that were seriously damaged, authorities said.

Residents said it was the second time this week a water main break caused an inconvenience in the neighborhood.

Cesar Nunez said his neighbors woke him up to tell him about his Dodge Ram that was stuck in the sinkhole.

“People knocked on my door and said ‘hey neighbor, your car is flooding,'” Nunez said. “Four days ago, crews were working on the street fixing something.”

City crews made repairs to the pipe a week ago, city officials said. Wednesday’s rupture happened due to a small section that failed. The city plans to assess the pipe, which was installed in 1972, and determine if it needs to be replaced.

Some residents were displaced due to water damage in their homes.

Crews are scheduled to repave the roadway Thursday morning.

PORTLAND, Ore. (KOIN) – An auto expert in Oregon is sharing advice on how car owners can battle a wave of catalytic converter thefts that have been driving motorists crazy.

Heather Ogawa, an automotive advisor with Affordable Tire in Portland, said she started noticing an uptick in the stolen car parts just as the pandemic began, in the early spring of 2020.