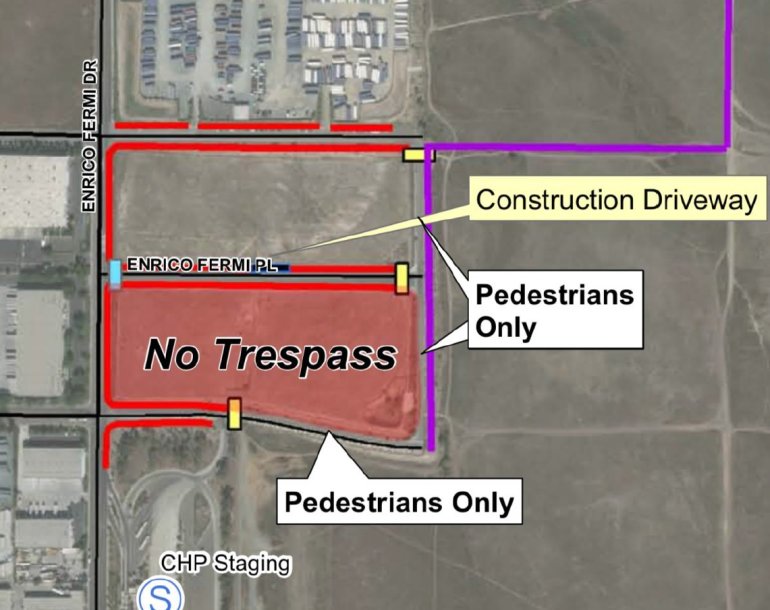 SAN DIEGO — The San Diego Sheriff’s Department Monday evening warned people to stay off two parcels of land where President Donald Trump will visit border wall prototypes during his first visit to California since being elected.

Trump is scheduled to fly into Marine Corps Air Station Miramar at 11:30 a.m. Tuesday, then head to Otay Mesa to view the 30-foot-tall border wall prototypes that have been erected there.

Violators will be arrested on suspicion of trespassing and the restriction will be strictly enforced, the sheriff’s department warned.

“Pedestrians are allowed on Enrico Fermi Drive, Airway Road, Kellianne Way, Siempre Viva Road and the sidewalks of Enrico Fermi Place,” according to the sheriff’s department.

After viewing the wall prototypes, Trump is expected to make a speech to members of the military at Air Station Miramar. He will then fly to Los Angeles, arriving at Los Angeles International Airport at 3:30 p.m., according to the White House. He will then likely be flown via military helicopter to the West Los Angeles area.

Trump is scheduled to attend a Republican National Committee fundraiser in the Beverly Hills or Bel Air area Tuesday night.