SAN DIEGO -- The late  comedy legend Jerry Lewis spent many of summers in San Diego -- living in a yacht docked at the Marriott Marina.

"Jerry loved the Hollywood, Beverly Hills, Bel Air style housing and all that, but in the summers he lived on his boat. His second home would be San Diego," said Lewis' former agent Rick Saphire. 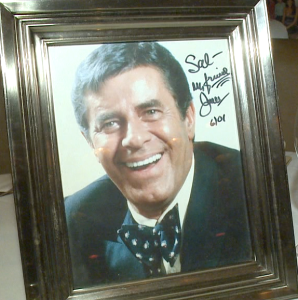 During the past 21 summers, Lewis would eat at DeMedici Restaurant on 5th Avenue in downtown San Diego "at least once a week," according to restaurant owner Salvatore Vitale.

"He loved shrimp cocktail. He wanted the bay shrimp instead of the jumbo shrimp and linguini with clams with red sauce, which we don't make but made it for him," said Vitale.

Vitale went on to describe Lewis as "very kind, warm, gracious and generous to a fault."

Lewis was also said to always draw and doodle on the tablecloths. One day he finally signed one of them for Vitale and his wife.

"There was linguini with red sauce stains all over it."

Lewis, the slapstick-loving comedian, innovative filmmaker and generous fundraiser for the Muscular Dystrophy Association, died Sunday after a brief illness, said his publicist, Candi Cazau. He was 91.

Cazau would not elaborate on the illness from which Lewis was suffering. John Fudenberg, coroner for Clark County in Nevada, said Lewis died from heart failure due to peripheral vascular disease.