SAN DIEGO - A San Diego man shot multiple times in the Las Vegas shooting is on a search to find the Good Samaritans who he says saved his life. 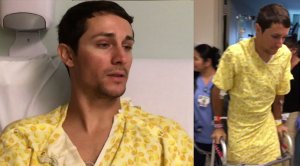 The 25-year-old Valley Center man suffered two gunshot wounds to his leg and hip. He remembers every second of the horrific moment of the mass shooting. Jefferey Koishor said when the shooting started, he laid on top of his friend to shield her from bullets.

"There were just so many bullets being fired. I nearly panicked," he said. He told her that they needed to get up because they were going to get trampled.

"I was running on my right leg for about 50 yards until I got to the House of Blues bar where it had a covered roof," said Koishor said, who added that blood coming from the two bullet wounds ran down his leg, soaking his shoe.

"Inside the bar was a gentlemen that picked me up, threw me on top of the bar, cut off my shirt and used it as a tourniquet because [my leg] was bleeding pretty bad," Koishor said. "He and another gentlemen carried me to a back parking lot and placed me behind a car."

A driver in an SUV pulled up and the men put Koishor into the backseat. He was then taken to a hospital.

"When they threw me in the vehicle I was in excruciating pain," he said.

Since being at the hospital, Koishor is recovering at a Las Vegas hospital. He posted video of him taking some steps.

Koishor said he's hoping to reconnect with the three men and a woman, who was keeping him calm while being driven to a hospital.

"I'm trying to find them to thank them for saving my life," Koishor said. "I can't be grateful enough. I really think they saved my life. I would've been sitting there at the venue with no one to carry me. I don't know if I would've made it or bled out."

He's overwhelmed with all of the support he's received, including the complete strangers who have donated to an online fundraiser.

Koishor is expecting to be released from the hospital Thursday and return to San Diego County.

LOS ANGELES (CNS) - A sheriff's deputy was assaulted Sunday morning shortly after 2 a.m. in the unincorporated Westmont area of South Los Angeles, and a suspect was in custody, a department official said.

The female South Los Angeles Station deputy was trying to stop a vehicle at Vermont Avenue and West 97th Street when the suspect attacked her and drove off, according to Deputy Trina Schrader of the Sheriff's Information Bureau.

SAN DIEGO (CNS) - Health officials in San Diego County have reported 386 new COVID-19 infections, bringing the total to 54,314 since mid-February, but no new deaths, according to the San Diego County Health and Human Services Agency.

The last new death was reported Thursday, which pushed the overall total to 868.

In a surprise announcement from his studio window to faithful standing below in St. Peter’s Square, Francis said the churchmen would be elevated to a cardinal’s rank in a ceremony on Nov. 28.