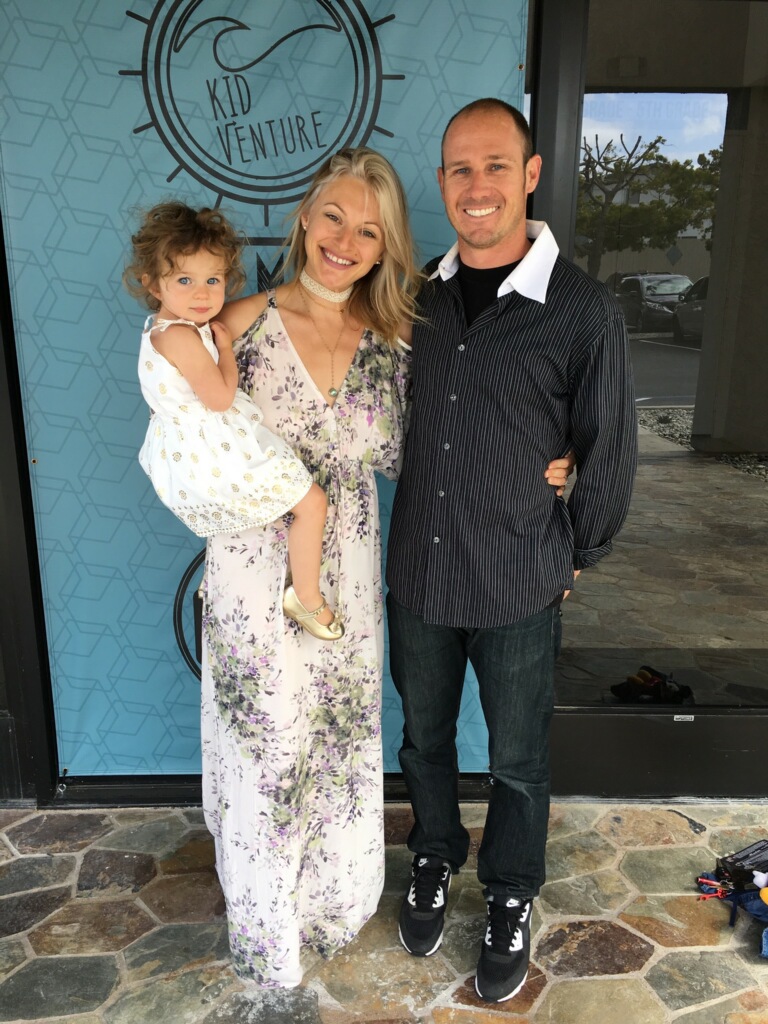 Cory Iverson of Escondido died near Fillmore while helping battle the 10-day-old inferno, which has spread over about 242,500 acres and destroyed nearly 1,000 structures.

Iverson, who leaves behind a pregnant wife and toddler daughter, had been with the state agency since 2009, according to Cal Fire Chief Ken Pimlott.

“More details will be made available as they are confirmed,” Pimlott said. “In the meantime, please join me in keeping our fallen firefighter and his loved ones in your prayers (and) all the responders on the front lines in your thoughts as they continue to work under extremely challenging conditions.”

Iverson, who was assigned to the Thomas Fire as part of a fire-engine strike team from Cal Fire’s San Diego unit, is survived by his wife, Ashley; 2-year-old daughter, Evie; mother, Denise Butler; stepfather, Scott Butler; and father, Craig Iverson.

“Cory and Ashley are expecting a second daughter this spring,” Pimlott said. “Our thoughts and prayers are with Cory’s family and all of his friends and co-workers throughout the department and the fire service.”

Cal Fire has assigned an accident-review team to determine the circumstances and cause of the fatality, according to Pimlott, who added that “until this review is complete, there is nothing more I can share.”

At 18 years old, Iverson starting volunteered with Cal Fire, eager to get as much experience as possible in a job he told them he was born to do. Iverson’s uncle was also a firefighter for several years.

“He was the type of man you’d want your daughter to marry and the firefighter you’d hope your son would become; the type of guy that you could rely on; the best fireman you could hope to have on your engine,” said personal friend and fire chief Jon Higgie.

Dozens of fellow firefighters lined up in Fillmore, where the accident happened, to honor Iverson in a procession back to the Ventura County Coroner’s Office. Later this week, a procession will be made back to his home in North County.

Despite the traumatic loss, firefighting personnel “must keep our focus on the fire,” Pimlott said.

“The firefight in front of us continues to go on,” he said. “The communities we are protecting are depending on us, and we will not fail.”

“His bravery and years of committed service to the people of California will never be forgotten,” the governor stated.

In Iverson’s honor, Capitol flags will be flown at half-staff.

As of late Thursday afternoon, the Thomas Fire, the fourth-largest blaze in California history, was roughly 30 percent contained, according to Cal Fire.

The American flag is now being flown at half-staff at the Cal Fire headquarters after a San Diego engineer died in the #ThomasFire. #RIP

We are deeply saddened to have to notify you of a fatality involving one of our firefighters. Today, Fire Apparatus Engineer Cory Iverson has succumbed to fatal injuries while engaged in fire suppression efforts on the Thomas Fire. We ask that everyone take a minute to keep the entire Iverson family and friends in your thoughts and prayers.