The 61-year-old said he’s been thinking about a White House run for the past 40 years, but it wasn’t until he saw how the current race was shaping up that he decided to throw his hat into the ring.

“American people don’t want career politicians. On the democratic side you have Hillary [Clinton] and [Bernie] Sanders, so there are not that many options,” said De La Fuente. 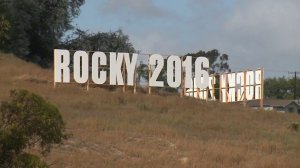 Even candidate Ben Carson wasn’t left out of the discussion.

“Most doctors know how to save your life. Which is needed, but they do not know how to solve 1000 different problems,” said De La Fuente.

Although he’s not exactly a household name, the colorful and overly confident Rocky had this to say:

“I’m Rocky inside the Trojan horse and I’m going to be fighting Goliath,” said De La Fuente. “I plan to beat Goliath which basically means an independent thinker in the White House that’s going to get things done. Not blame one party or the other. I’m not worried about any of them… I think I’d have them for lunch.”

De La Fuente refers to himself as a conservative Democrat.

San Diego Democratic Party chairwoman Francine Busby said she is aware Rocky’s running, but says he has not contacted her or anyone in the local Democratic party.

Rocky has set up a website for his Rocky2016 campaign.

Worker was dead in store’s bathroom for 4 days