Skip to content
This is an archived article and the information in the article may be outdated. Please look at the time stamp on the story to see when it was last updated.
SAN DIEGO — All northbound lanes at the San Ysidro Port of Entry were closed early Monday morning to allow border agents to add more protective barriers, according to U.S. Customs and Border Protection officials. At about 3:15 a.m., the San Ysidro Port of Entry could be seen lined with members of the military blocking many northbound lanes. “[We] have temporarily suspended vehicle processing for northbound travelers at the San Ysidro port of entry Monday morning to position additional port hardening materials,” according to border officials. “After the materials are in position, CBP will resume processing northbound vehicle traffic in select lanes at the border crossing.” 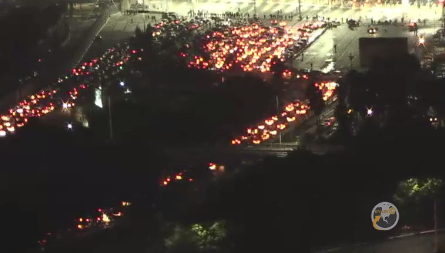 Southbound lanes leading into Mexico and the Pedestrian West facility were not affected by the closure. As of 6:30 a.m., lanes reopened and traffic was slowly moving into San Diego. “CBP is again processing northbound vehicle traffic at San Ysidro with select lanes remaining closed. The San Ysidro Pedestrian East facility is also open for northbound traveler processing,” according to CBP spokeswoman Jackie Wasiluk’s release sent at 7:20 a.m. The lanes were closed to install additional port hardening materials at the port of entry, to include jersey barriers and concertina wire, to prepare for the potential arrival of thousands of people migrating in a caravan heading towards the border of the United States, according to CBP spokesman Mike Niezgoda. “In the early morning hours, CBP officials received reports of groups of persons from the caravan gathering in the city of Tijuana for a possible attempt or attempts to rush illegally through the port of entry instead of presenting themselves as required to a CBP officer,” Niezgoda said. Pete Flores, director of CBP Field Operations, said his agents will not allow unlawful entry into the U.S. and they needed to get ahead of a potential flood of people coming to the border. “Waiting until a large group of persons mass at the border to attempt an illegal crossing is too late for us; we need to be prepared prior to when they arrive at the border crossing,” Flores said. Tensions remained high in Tijuana and at the U.S.- Mexico border Sunday, where thousands of members of a migrant caravan began arriving in the past week planning to seek asylum in the United States About 2,400 migrants, mostly from Central America, have arrived in Tijuana since last Sunday. On Sunday, two dueling demonstrations were planned — one demanding the migrants not engage in protests that can close roadways or confrontations with American officials that can cause the closure of ports of entry, and the other criticizing what some perceive as discrimination against the migrants. U.S. Customs and Border Protection agents have slowly filtered through asylum claims, accepting roughly 100 each day and some from as long as six weeks ago. It is unknown how long the majority of immigrants will have to wait to have their asylum claims managed. This is a developing story.