A man was carrying a pistol when he robbed the GameStop shop in the 8800 block of Navajo Road, San Diego police said. 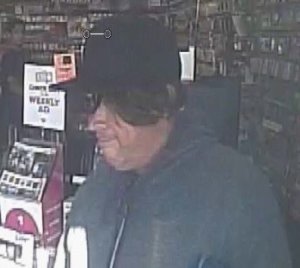 After one of the victims turned over an undisclosed amount of money from the store’s register, the suspect demanded the employees’ wallets, the officer said.

Stymied by the locked door, the armed robber waited in the front of the store but left when another customer entered, Buttle said.

The victims were “doing absolutely fine and doing their best to enhance the investigation,” Lt. Jeffery Jordon said.

The bandit was described as a heavyset white man between 40 to 50 years old, roughly 5-feet-7 tall and 200 to 250 pounds. He wore jeans, a gray hooded jacket, black gloves and a black baseball cap over the red hairpiece.

The suspect’s vehicle was only described as having four doors and was blue or white in color.