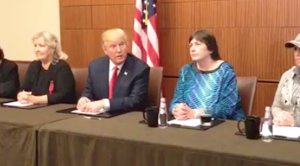 Hours before he is slated to appear on the debate stage, Trump made a surprise appearance with women who have in the past accused Bill Clinton of inappropriate sexual activity. Trump spokesman Jason Miller said the women will be in the audience at the debate, which begins at 6 p.m. and will be co-moderated by CNN’s Anderson Cooper.

The stunning development comes as Trump tries to shake off the fallout of the release of a decade-old video tape that shows him making lewd and sexually aggressive remarks about women. Clinton’s aides told CNN’s Jeff Zeleny they did not expect this in their planning for the debate.

“Hillary Clinton understands the opportunity in this town hall is to talk to voters on stage and in the audience about the issues that matter to them, and this stunt doesn’t change that,” she said. “If Donald Trump doesn’t see that, that’s his loss. As always, she’s prepared to handle whatever Donald Trump throws her way.”

Trump’s pre-debate surprise likely dashes hopes of Republican establishment leaders who spent the weekend arguing the nominee would be best served if he could turn away from his more volatile instincts. The turmoil in Trump’s campaign have tipped the Republican Party into chaos. Dozens of elected Republicans in Washington and state capitals around the country have condemned Trump — and many have called for him to step aside. His own running mate, Mike Pence, said Saturday he can’t defend Trump’s comments.

President Barack Obama joined in the condemnation Sunday, saying the comments suggest Trump “doesn’t care much about the basic values.”

“One of the most disturbing things about this election is just the unbelievable rhetoric coming at the top of the Republican ticket,” Obama said at a campaign event in Chicago for US Senate candidate Tammy Duckworth. “I don’t need to repeat it. There are children in the room.”

Meanwhile, Clinton has largely stayed quiet, letting the turmoil in the GOP unfold and preparing to address the controversy publicly for the first time before an audience of millions. 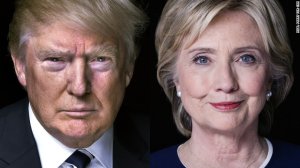 Trump heads into the debate under intense pressure to deliver a powerful performance that demonstrates regret and remorse for his conduct. Only a top-notch showing will help Trump stem the GOP exodus away from his campaign that kicked into full gear Saturday.

On Sunday, he struck back, hinting to Republicans distancing themselves from him that they would would regret it.

“So many self-righteous hypocrites. Watch their poll numbers – and elections – go down!” he tweeted.

“The fact is that men at times talk like that. Not all men, but men do. He was wrong for doing it. I am not justifying it. I believe it’s wrong. I know he believes it’s wrong. I believe this is not the man we’re talking about today,” Giuliani told CNN’s Jake Tapper on “State of the Union.”

Clinton will enter the showdown sensing she might be able to land a knockout punch that finally kills off Trump’s campaign at its moment of greatest vulnerability, less than a month before voters go to the polls. But she will be on guard for any risky gambit by Trump to try to deflect from the uproar surrounding his lascivious past by bringing up allegations of sexual misconduct by her husband, former President Bill Clinton, in the 1980s and 1990s.

The drama will unfold before tens of millions of viewers and will be a fresh reminder how the former star of “The Apprentice” has effectively turned American politics in 2016 into one giant reality show revolving around himself and consuming the whole country.

Trump’s attempt to rescue his campaign will be all the more complicated since the debate will use a town hall format — a tricky one for novice candidates — and will take place in front of a group of undecided voters, some of whom could have pointed questions about his behavior.

Trump must address female voters in particular, given that there is no path to the White House for him unless he can improve his standing among college educated suburban women in key swing states like Pennsylvania and Colorado.

His task is made even more daunting given that he botched the first debate nearly two weeks ago, crushing all the momentum he built up in September and sending his campaign into a spiral, from which, it has not recovered.

Trump’s weekend troubles, which produced the most stunning 24 hours of an already rollicking 2016 campaign, forced the Clinton campaign into some last minute adjustments before the debate.

The former secretary of state spent Saturday retooling her strategy. Sunday’s showdown offers her a chance to hit Trump when he is down and to deliver a closing argument about why his current troubles validate the central theme of her campaign, that he lacks the temperament and character required of a president in the Oval Office.

“I think what she needs to is come out fierce, come out and condemn Donald Trump in the strongest words she has ever used,” Patti Solis Doyle, who ran Clinton’s 2008 primary campaign, said Saturday on CNN. “She needs to stand up for these women that he has insulted, that he has offended.”

Palmieri told reporters Sunday that the candidate had been briefed on Trump’s comments during debate prep but couldn’t confirm that Clinton had actually watched the video.

“We briefed her on it during debate prep,” Palmieri said. “So many memorable moments in this campaign that they no longer become memorable. This is one of them.”

As well as going on the offensive against Trump, Clinton is also likely to take advantage of Sunday’s massive television audience to lay out some of the policy approaches she would adopt to improve the lives of everyday Americans.

But all eyes will be on how Trump responds to the crisis enveloping his campaign. His attempt to save his White House hopes with a big television moment has few precedents in modern political history.

Ironically, one parallel might involve Clinton herself. The future first lady appeared on “60 Minutes” with her husband in 1992 and turned in a stunning performance to rescue his Democratic primary campaign and political career after he was assailed by allegations of infidelity.

Forty years earlier, Richard Nixon pulled off the same kind of high wire act on television that faces Trump when he was in danger of being thrown off Dwight Eisenhower’s presidential ticket due to a campaign finance scandal. His appearance, which came to be known as the Checkers speech, was good enough for him to be retained as vice presidential nominee and saved his political future.

Trump needs nothing less on Sunday.

George W. Bush issues statement on ‘brutal suffocation’ of George Floyd: ‘It is time for us to listen’

Former President George W. Bush issued a statement Tuesday regarding the "brutal suffocation of George Floyd," saying it is "time for us to listen" and that it is time for America to "examine our tragic failures."

The full statement is below:

"I find it baffling and reprehensible that any Catholic facility would allow itself to be so egregiously misused and manipulated in a fashion that violates our religious principles, which call us to defend the rights of all people even those with whom we might disagree," Gregory said in the statement.

Biden: Trump ‘consumed’ by ego, not leading during crisis

PHILADELPHIA (AP) — Joe Biden on Tuesday blistered President Donald Trump a day after police drove back peaceful protesters near the White House so Trump could pose with a Bible before a damaged church. Biden said Trump's “narcissism has become more important than the nation that he leads.”

The presumptive Democratic presidential nominee delivered a speech at Philadelphia's City Hall, addressing the civil unrest across America following the death of George Floyd. Biden said "the moment has come” to deal with systemic racism and deeply ingrained economic inequality — and insisted that the nation can't wait until November's election and its outcome.