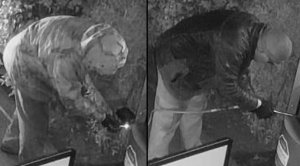 The pair first attempted to blow up an ATM on July 4 outside Cal Coast Credit Union on Ruffin Road, according to FBI Special Agent Sarah Lawand and Special Agent Matt Beals from the Bureau of Alcohol, Tobacco and Firearms. The suspects used a pipe bomb that damaged the ATM, breaking a glass pane, but fled southbound on Ruffin Road in an unidentified dark colored vehicle without taking any money.

Apparently learning from their mistakes, the duo pulled off a successful theft on Sunday, blowing up an ATM at the Chevron station in the 9600 block of Miramar Road, authorities said. The gas station was closed at the time and no injuries were reported, and the thieves made off with an undisclosed amount of cash.

To pull off the heist, one of the suspects drilled a hole in the ATM and filled it with gasoline, while the second suspect placed a fuse into the ATM and detonated the cash machine, Lawand and Beals said in a joint statement. After stealing the cash, they fled eastbound on Miramar Road in a 2000 to 2006 dark colored Ford Escape with after market wheels, a tow hitch with ball and “cold” license plates. 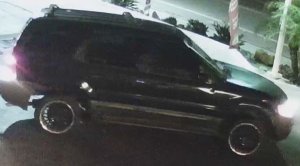 One suspect was described as a light-skinned man, about 5 feet 10 to 6 feet with a medium to heavy build. During the second theft, he wore a dark beanie-style hat with a short brim, a leather jacket, khaki cargo pants and dark skateboard-style shoes.

The second suspect was described as light-skinned man, with the same height and build as the first suspect. During the second theft he wore a camouflage rain jacket with a hood, dark jeans and brown boots.