The first theft from the home's carport in the 6600 block of Bell Bluff Avenue, between Jackson Drive and Mission Gorge Road, occurred Oct. 13 and the second happened two days later, according to San Diego police.

After the second theft, the victim installed cameras inside the garage.

The cameras captured surveillance footage around 2 p.m. Oct. 25th that showed a man using bolt cutters to free a silver-and-white Raleigh M80 mountain bike before putting it in the bed of a pickup and driving away. 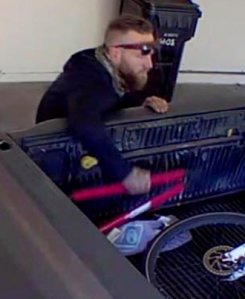 Investigators were still trying to determine if the man caught on the surveillance footage was responsible for all three mountain bike thefts, which added up to $3,000 in value.

The thief was described as a white man in his 30s with short blond hair and a full beard. He was last seen wearing a black hoodie, gray athletic shorts with gray leggings underneath and black and white tennis shoes with a red sole.

His vehicle was described as a dark Ford Super Duty truck. It did not have a rear license plate, but did have a four-way tow hitch.

Anyone with information about the suspect was asked to call SDPD's Eastern Division at 858-495-7905, Crime Stoppers at 888-580-8477 or contact the agency online. Tipsters may remain anonymous and could be eligible for a reward of up to $1,000.

We need your help identifying and locating this grand theft suspect. Anyone with information please call @sdcrimestoppers at 888-580-8477. Up to $1000 reward being offered. pic.twitter.com/L5D9TD4DZQ

SAN DIEGO -- A motorcyclist suffered serious injuries this morning in a collision with a vehicle on state Route 52 near Mission Trails Regional Park.

The crash, involving a motorcycle and an Infiniti sedan, was reported shortly after 7:15 a.m. on westbound state Route 52 just east of Santo Road in the Tierrasanta area, according to a California Highway Patrol incident log.

He intends to declare at a news conference that with new federal funds, he hopes to prevent another tragedy.