OCEANSIDE, Calif. — Police are searching for a 55-year-old man from Oceanside who has been missing for nearly a month.

John Sturkie was last seen around 5 p.m. on Jan. 4 at his Oceanside home, according to police. Sturkie’s wife said he came home in a rush and said he planned to go to the beach. His phone was tracked to El Cajon on Jan. 5 and 6, until his phone died. 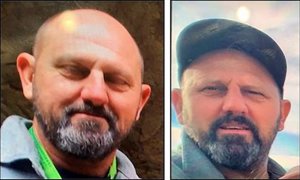 He is described as 6’5″ and 243 pounds. He has blue eyes and is bald with a salt-and-pepper goatee. His wife said she last saw him in a black knit hat, a gray fleece and tan pants. He drives a 2015 silver Toyota Tundra 4WD with lift kit and California license plate No. 62517F2.

Anyone with information should call Elizabeth Bunn of Oceanside Police Department at 760-435-4069 or email ebunn@ci.oceanside.ca.us.