NUNAVUT, Canada — A Canadian man was killed protecting his children from a polar bear while they were visiting an island in Canada’s Arctic Archipelago, police said.

Aaron Gibbons, 31, and his children were visiting Sentry Island, a popular spot for fishing and hunting in Canada’s Hudson Bay, on Tuesday when the bear approached them, his family told CNN partner CBC News.

Gibbons, who lived in Nunavut, the country’s northernmost province, died after putting himself between his children and the bear, the man’s cousin Eric Anoee told CBC.

In a statement, the Royal Canadian Mounted Police said Gibbons was unarmed at the time of the attack. 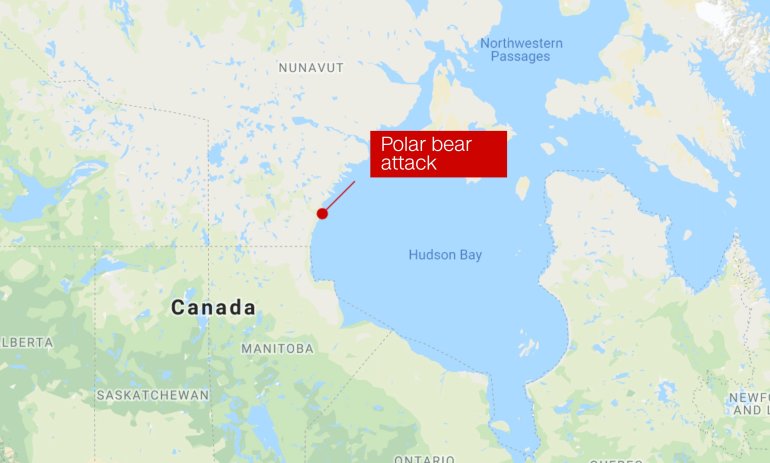 The polar bear was shot and killed by other people who were on the island, police said.

Gibbons who was described as a devoted father and a good hunter lived with his family in the nearby community of Arviat. About 2,500 people live the area.

“It’s really just incredibly sad. We’re a small community and when something like this happens, it affects the whole community,” said John Main, a local representative from the area.

The last deadly polar bear attack in the area was 18 years ago, CBC reported.

CORONADO, Calif. — Another man has been arrested in connection to an early May robbery and shooting incident that injured a Coronado High School student.

Coronado police detectives said Chula Vista resident Alejandro Guzman was arrested Wednesday. Guzman, 18, is charged with robbery after a botched May 4 jewelry sale led to the shooting of Coronado High senior Jacob Mckanry. That night, Mckarny was shot in the back on Orange Avenue near 10th Street after meeting two men to sell jewelry after arranging the sale online.

The fire was reported at around 2 p.m. at a single-family home in the 10100 block of Embassy Way. When the first crews arrived, the home was already fully engulfed in flames.

SAN DIEGO (CNS) - To help residents impacted by feelings of loneliness and isolation during the COVID-19 stay-at-home order and as the city begins to slowly reopen, the City of San Diego expanded its AgeWell Social Calls Program Wednesday to offer comfort to San Diegans of all ages, including those who only speak Spanish.

"The AgeWell Social Calls Program already offers invaluable comfort to seniors ages 55 and older," said Kristina Fraijo, program manager. "Now, thanks to our expanded program, younger residents and members of our Spanish-speaking communities will also be able to benefit from compassionate, live conversations on a weekly basis."