KNOXVILLE, Tenn. –  Pat Summitt, who built the University of Tennessee’s Lady Volunteers into a perennial power on the way to becoming the winningest coach in the history of major college basketball, died Tuesday.

Her death came five years after she was diagnosed with Alzheimer’s Disease. She was 64.

Summitt battled the disease with “fierce determination just as she did with every opponent she ever faced,” her son, Tyler Summitt, said.

“Even though it’s incredibly difficult to come to terms that she is no longer with us, we can all find peace in knowing she no longer carries the heavy burden of this disease,” Tyler Summitt said. 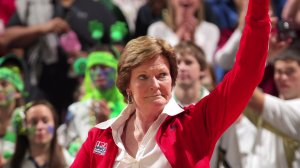 In her 38 years at Tennessee, Summitt won eight national titles and 1,098 games — the most by any Division 1 basketball coach, male or female. Her teams made an unprecedented 31 consecutive appearances in the NCAA Tournament.

Beyond the wins and the statistics, Summitt had a profound impact on women’s college athletics.

When she became head coach of the Lady Vols in 1974 at the age of 22 — barely older than some of her players — the NCAA did not even formally recognize women’s basketball. Summitt had to drive the team van to road games herself.

As the wins and the championships piled up, Summitt’s astonishing achievements commanded national attention and helped usher women’s basketball into the spotlight.

“She’ll be remembered as the all-time winningest D-1 basketball coach in NCAA history, but she was more than a coach to so many — she was a hero and a mentor, especially to me, her family, her friends, her Tennessee Lady Volunteer staff and the 161 Lady Vol student-athletes she coached during her 38-year tenure,” Tyler Summitt said.

Current Lady Vols Coach Holly Warlick credited Summitt with playing a “very significant role in molding me into the person I am.”

“Pat gave me strength and courage to face anything,” Warlick said. “She was driven to perfection and always remained true to her standards. That meant doing things the right way, no matter what. In my eyes, there’s never been anyone better than Pat Summitt.”

A leader through victories and tough times

Summitt’s impressive coaching record earned her a spot in the Basketball Hall of Fame in 2000.

In 2011, she announced she was diagnosed with early onset Alzheimer’s, but vowed to keep coaching.

“This is not a pity party,” she said. “We’re not going to sit here and feel sorry for Pat Summitt.”

She stayed on for one more year, securing the Lady Vols their 16th SEC Championship under her leadership before retiring. But she didn’t step away from the sport she loved.

She retired in 2012, eight months after her diagnosis.

“If anyone asks, you can find me observing practice or in my office,” Summitt said at the time. “Coaching is the great passion of my life, and the job to me has always been an opportunity to work with our student athletes and help them discover what they want. I will continue to make them my passion.”

Although she was notoriously tough on the sidelines, Summitt’s legacy extended far beyond the game.

Summitt’s concern for her players extended to the classroom as well. All of the athletes she coached who completed their eligibility went on to graduate from the university.

Summitt’s success made her a legend at the University of Tennessee, even to the school’s other celebrated heroes. In 2012, Tennessee alum and NFL quarterback Peyton Manning presented Summitt with the Arthur Ashe Courage Award at ESPN’s ESPY Awards.

“I just always appreciated Pat’s friendship and support,” Manning said Tuesday. “I was always impressed with how all of her former players spoke about her. You speak to people like Tamika Catchings or Chamique Holdsclaw, and they just talk about the role that Pat played in all their lives on and off the court. You can just tell the impact that she had on those players.”

On Tuesday, he called her a patriot, a “proud Tennessean” and an unparalleled winner.

“Her legacy, however, is measured much more by the generations of young women and men who admired Pat’s intense competitiveness and character, and as a result found in themselves the confidence to practice hard, play harder, and live with courage on and off the court,” Obama said.

“For four decades, she outworked her rivals, made winning an attitude, loved her players like family, and became a role model to millions of Americans, including our two daughters,” Obama said.

Summitt remained a pillar of the University of Tennessee community and culture until her death. When news of her illness became public in 2012, “We Back Pat” became a rallying cry for thousands upon thousands of students and supporters who attended games bearing t-shirts and signs with the slogan.

As news of her death spread, reaction began to pour in from Tennessee and around the country.

“We have lost a legend,” NCAA President Mark Emmert said Tuesday. “Pat Summitt’s courage and tenacity on and off the court should be commended and emulated. Her commitment to excellence and developing young people leaves a powerful imprint on college basketball, higher education, and all individuals who have sought to excel in sports and life.”

Tennessee issued a statement calling Summit “a global icon who transcended sports and spent her entire life making a difference in other people’s lives.”

“Pat was so much more than a Hall of Fame coach; she was a mother, mentor, leader, friend, humanitarian and inspiration to so many,” the school said. “Her legacy will live on through the countless people she touched throughout her career.”