OCEANSIDE, Calif. — A paddle out memorial was held Sunday afternoon for a 12-year-old Oceanside boy who was killed last week while riding his bike to school.

Holding hands and in a circle, family and friends of Logan Lipton paddled out on their surfboards in Oceanside honoring the young boy who loved the water.

“It was a beautiful ceremony. It was for my son who was a beautiful kid. He packed a lot into 12 years and you can see that everyone loved him. I love all these people and he did too,” said father Greg Lipton.

Logan was riding his bike on Coast Highway Thursday morning when police say he collided with a truck that was making a left turn.

Officers say the driver, who did not see the boy, pulled over after hearing a big thump.  That’s when police say the driver found Lipton underneath his vehicle. Lipton died on his way to the hospital. 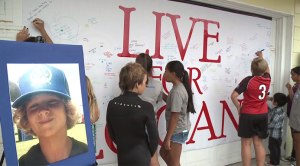 Stowe said he’s been dealing with Lipton’s death the best he can, but is still in shock.

“I was really sad. We all had a group in our library talking about him and we shared what we liked about him. It helped me a lot,” said Stowe.

During the paddle out memorial, his friends cheered and kept splashing the water – remembering the athletic boy who was known by so many.

Back on the sand, a group of people held a prayer and released balloons in memory of Logan.

“I think he would be very, very happy that this many people care about him,” said friend Emma Comas.

A GoFundMe account has been set up in Logan’s name to support his family.