ANAHEIM, Calif. – Two Orange County families have found themselves embroiled in a canine custody battle after a dog ran away while its original owners were out of town for a funeral, then was adopted out to another family.

Josette Psofimis of Anaheim said her family owned “Olympus” the Labrador for four years. But when she left him with a family member on March 5 to attend her son’s funeral, the dog ran away, KTLA reported. 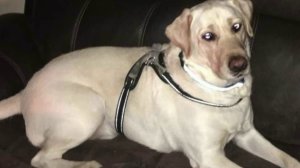 When she returned on March 13, she learned Olympus had been picked up by an Orange County animal shelter and adopted by another family.

“Olympus got loose and ran nine miles to try to find me,” Psofimis said. Psofimis said her family didn’t tell her about Olympus’ disappearance because they thought it’d be too emotional for her at the time.

“As a standard, we always scan for a microchip and identification,” said Mike Kaviani, the Orange County Animal Care Director. Olympus didn’t have any identification and was placed on a three-day hold at the shelter.

Olympus was adopted on the fourth day at the shelter as he was a very friendly, highly-sought after breed, Kaviani said.

Since the new family is the legal guardian of the dog, the decision on whether they want to give him back is completely up to them.

Psofimis’ granddaughter Olivia Gonzalez was devastated to hear about Olympus.

“He was ours and will always be ours,” Gonzalez said. “I’m not going to stop fighting [to get him back.”

Psofimis has written a letter to Olympus’ new owners in hopes they will change their mind and return him.

“We can all agree how this just tugs at your heart and what both families have experienced and the dog in the middle of it,” Kaviani said.

SACRAMENTO - Gov. Gavin Newsom plans to hold a news briefing Monday to update the public on the state's response to the coronavirus pandemic.

The briefing comes on the heels of the departure of Dr. Sonia Angell, director and state public health officer for the California Department of Public Health. Angell resigned from her role Sunday without explanation following a recent technical glitch that delayed the state's reporting of COVID-19 data.