National City police responded at about 4:15 a.m. Monday to a report of a car that crashed into a building located at 1445 Tidelands Avenue. When police arrived, they saw that the accident actually involved a train derailment and that one of the cars appeared to have hit the building, home to electronic parts supplier CNC Electronics West. Fire officials said the building had been red tagged due to the significant damage incurred from the crash.

“Lot of our equipment is knocked off the shelves — computer systems. There’s a large gap, size of a VW knocked out of the wall — structural damage to the top of the ceiling,” said Jason Townend, an employee.

A spokesperson for BNSF Railway, which operated the train, said there were eight empty cars on the freight train and that no people were injured in the derailment. The train was carrying auto racks and was on its way to pick up cars, though the train’s destination was not confirmed.

According to police, BNSF crews may not have the track cleared until around 6 p.m. Tuesday, as they need to remove cars then make repairs to the damaged track.

Police shut down Tidelands Avenue between 19th Street and Civic Center Drive to assess the damage, which affected traffic flow in the area. A battalion chief with San Diego Fire said the roads would remain closed into Monday afternoon. By 10:00 p.m. parts of Tidelands Avenue were still closed and the train was blocking traffic from crossing the tracks at 19th Street.

Officials were investigating the cause of the derailment Monday morning. 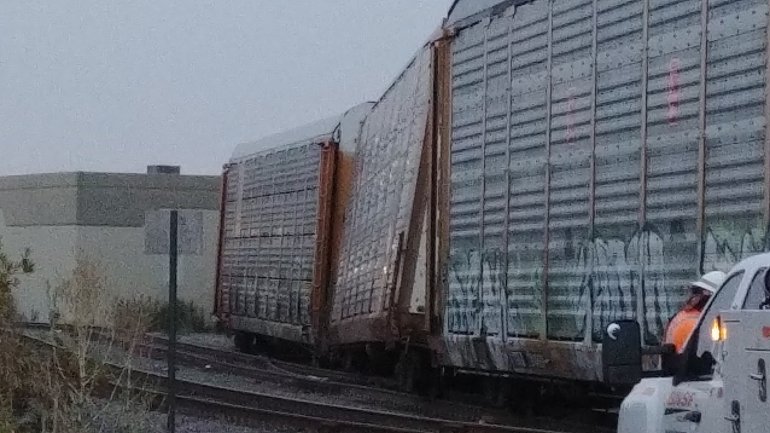