Khaled Batarfi, a senior al Qaeda figure, was among the escapees, officials said.

Dozens of attackers took control of government buildings, including the city’s Central Prison, Central Bank and radio station during the assault early Thursday, according to officials.

Government troops arrived early Thursday and clashed with the al Qaeda fighters, and most of the militants fled, the officials said. 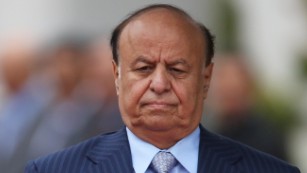 Yemen has been descending into chaos in the weeks since Shiite Houthi rebels removed Hadi, a Sunni, from power. 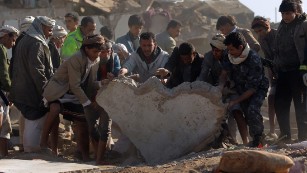 Yemeni civilians and security forces search for survivors in rubble after Saudi airstrikes against Houthi rebels near Sanaa Airport on March 26.

Because of that, the conflict in Yemen risks becoming a proxy war in the struggle between the Iranians and the Saudis for preeminence in the Middle East. The Saudis have conducted airstrikes against the Houthi rebels and could send in ground troops.

But little is simple in the Middle East. And while the conflict between the Houthis and forces loyal to Hadi rages in the western part of the country, where it has caused hundreds of civilian deaths, al Qaeda in the Arabian Peninsula, or AQAP, controls parts of eastern Yemen.

AQAP is considered one of the most ruthless branches of the terrorist organization.