SAN DIEGO – The off-duty deputy injured in a shooting in the Gaslamp Quarter overnight has worked for the San Diego County Sheriff's Department for 11 years.

Jason Philpot is expected to recover from his injuries, according to Sheriff's spokesman Sammy Castañon. The deputy works in the Sheriff's emergency services division.

"Sheriff Bill Gore, along with friends and family, were with Jason in the hospital shortly after the incident.  The Sheriff is grateful to the San Diego Police Department and all of the medical personnel who are providing Jason with the best possible care… Our thoughts and prayers are with Deputy Philpot and his family as they recover from this frightening event."

San Diego police are leading the investigation in the Gaslamp Quarter shooting.

Philpot and a bystander suffered non-life-threatening gunshot wounds early Monday during a scuffle with an unidentified assailant near Petco Park, authorities reported.

Philpot was walking with a group of people, including two off-duty Escondido police officers, when a long-haired man armed with a pistol confronted them in the 500 block of Island Avenue in the Gaslamp Quarter about 1:15 a.m., according to San Diego police.

The deputy tried in vain to wrestle away the weapon, and during the struggle it repeatedly discharged, wounding him three times in the shoulder, Officer John Buttle said. A man walking nearby was injured in the arm by an apparent stray round. 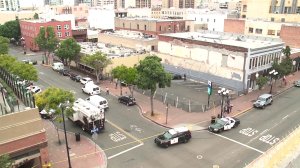 Following the shooting, the assailant -- described as a roughly 5-foot- 10-inch, 165-pound black man in his 30s with shoulder-length dreadlocks and wearing black shorts and a long-sleeve shirt -- fled to the south and east. He remained at large Monday afternoon.

Medics took Philpot to UCSD Medical Center in Hillcrest. The other victim drove himself to a hospital, SDPD Lt. Ernesto Servin said.

What prompted the violence was not immediately clear.

LATEST FORECAST ADVISORY: 11AM Monday Update: Tropical Storm Isaias is moving a little faster. Isaias has gotten better organized over the past 24 hours. Isaias continues to produce an area of vigorous Convection near and to the northeast of its low level center. Overnight radar has shown some mid-level eye feature. Some slight strengthening has occurred along with thunderstorm activity blowing up around its center. Hurricane hunters have found very little if any changes. As of 11AM Monday, winds are at 70mph, making for a strong tropical storm. Pressure is at 998mb and movement around 13mph towards the north.