SAN DIEGO – A North County man who spent six weeks in a coma returned home Wednesday to celebrate Christmas in February with all of his neighbors.

Ryan Caine went to the hospital with flu-like symptoms on December 10. Soon after, he was diagnosed with pneumonia that went septic, his family said. Caine was placed in the intensive care unit where he stayed for nearly six weeks.

“His whole body was in a paralytic state and was completely run by machines for six weeks,” his mother Janet Caine said. “When Ryan was in ICU, there were five other patients on ECMO [a life support system] for the same condition he was in. Ryan was the only survivor.”

“One of the first things he asked [when he woke up] was, ‘Did I miss Christmas?’” his mother said. “I said, ‘No, Christmas can happen any time of the year and it’s waiting for you at home.’” 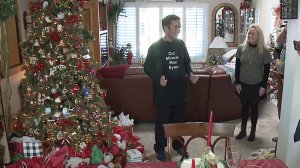 The Caine family lives on the well-known street “Christmas Card Lane” in Rancho Peñasquitos. People all over San Diego drive to their neighborhood during the holidays to see decorations.

Their neighbors couldn’t think of a better way to welcome Caine home than to line Ellingham Drive and celebrate Christmas.

“I dreamed of the day when he would pull up on the street with me and come home,” his mother said. “Believe in miracles. They do come true.”

Wearing an “Our Miracle Man” t-shirt, Caine thanked all of them for coming out.

One of the dozens of neighbors who lined the “Christmas Card Lane” said it’s been an emotional experience and was proud of him for being a fighter.

“It’s unbelievable what the power of pray can do and more importantly, what the power a community coming together can do,” Ryan’s father Russ Caine said.

“I’m so blessed that Christmas is still here,” Caine said. “I hope never to go back to a hospital again.”