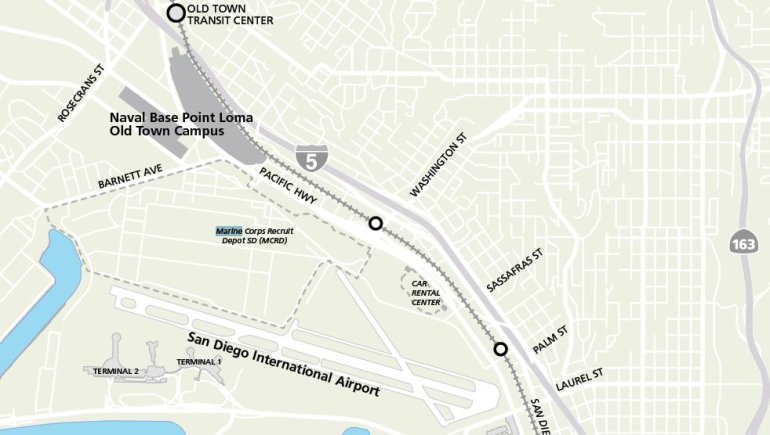 According to SANDAG, the agreement does not require either party to take action on the 70-acre property, but it will allow both sides to discuss their vision for the complex’s future. The agreement opens the door to potentially use the complex as San Diego’s “Grand Central Station” to connect public rail transit to the San Diego International Airport.

“This is the beginning of what I expect to be a long partnership with the Navy,” said SANDAG board Chair and Poway Mayor Steve Vaus. “The MOU creates the opportunity for SANDAG and the Navy to do something very special in the region, clearing a path for us to work on a major transportation hub and providing a transit link to the airport.”

Although planning for the potential transit hub is still in its nascent stages and years from completion, the project has the support of SANDAG Executive Chairman Hasan Ikhrata and San Diego Mayor Kevin Faulconer, who sits on the SANDAG board.

“This is an amazing opportunity to strengthen the Navy’s presence in San Diego, create thousands of jobs and make it easier for people across the region to get to and from the airport,” Faulconer said. “This agreement is a promising beginning to what could be one of the most transformative projects in our region’s history.”

The project could eventually receive partial funding from the San Diego County Regional Airport Authority, which signed a 10-year agreement with its airline partners last week to fund improvements to public transportation to and from the airport.

The complex is currently home to Naval cybersecurity and information officials, including the Naval Information Warfare Systems Command. More than 3,500 personnel currently work at the World War II-era complex, using it for lab and storage space.

“The Navy remains dedicated to creating a more modern, efficient workspace on the OTC property to better meet the mission requirements of Naval Information Warfare Systems Command and the other tenants on the property, while working closely with SANDAG and other entities to foster robust community engagement for this project,” said Capt. Mark Edelson, the commanding officer of Naval Facilities Engineering Command Southwest.

This is the same apartment where last Saturday she woke up to blood dripping from her ceiling. That blood came from a decomposing body in the apartment above hers that had been there for days.