EL CAJON, Calif. – More than a dozen people were arrested Saturday after rallies and protests happened in memory of Alfred Olango.

Twelve protesters were arrested in El Cajon overnight, after they refused to leave the area near the site of Tuesday’s fatal officer- involved shooting, police said.

Four others were arrested for alcohol-related crimes and one person was taken into custody on an unrelated arrest warrant, all in the vicinity of the protest site in the 800 block of Broadway, Lt. Rob Ransweiler said. 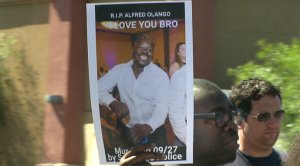 A vehicle was pulled over by officers for a traffic infraction as it was leaving the protest area, resulting in the arrest of the driver for drunken driving and being under 21. Two passengers in the car were arrested for being drunk in public, Ransweiler said.

And, as a small group of protesters gathered near the site where the arrests were made, a fight broke out between a few of the protesters. Rumors swept the site that it was reported that someone was leaving to get a gun.

“Sensing this shift in the demeanor of the crowd and out of concern for community safety, officers declared an unlawful assembly and ordered the group to disperse,” Ransweiler said in a statement. “The majority of the group left at this time, however some remained.”

The protesters that did not leave, promised to do so, but did not, police said. Eventually, it became apparent the remaining protesters were not planning to leave, so they were told a third time to leave the area.

When they refused to disperse, officers arrested 12 adults for failing to depart an unlawful assembly, one was arrested for public intoxication and another on an arrest warrant.

It was the fifth consecutive night of unrest and protests of the fatal police shooting of Ugandan immigrant Alfred Olango during a confrontation at a strip mall near Parkway Plaza earlier this week.

El Cajon police released two videos of the shooting Friday. Each was recorded at a taco shop parking lot in the 800 block of Broadway on Tuesday afternoon — one by a surveillance camera next to a drive-through window, the other by a witness who recorded it on her cellphone.

The snippets show officers Richard Gonsalves and Josh McDaniel approaching Olango, seen striding through a parking area and then pacing back and forth next to a parked pickup truck. Following a brief face-off, gunshots sound, and Olango collapses to the pavement.

El Cajon Police Chief Jeff Davis confirmed that Gonsalves fired his service gun at Olango as McDaniel simultaneously shot him with an electric stun gun. Both officers have 21 years of law enforcement experience and were placed on administrative leave per department protocol.

The events that led to the fatal confrontation began when patrol personnel were dispatched to investigate three emergency calls from Olango’s sister reporting that he was behaving erratically and walking into traffic in a commercial district a few blocks north of El Cajon Valley High School.

Police said that Olango was uncooperative, repeatedly refused to remove his hand from his pocket, assumed “what appeared to be a shooting stance” and pointed at Gonsalves an object that turned out to be an electronic smoking device that resembled the barrel of a gun.

At midafternoon Sunday, police said crowds had not returned to the site of the shooting, and there were no reportable incidents at the shooting site or at police headquarters.