NEW YORK – An employee at the Clinton Correctional Facility in New York is being questioned as a possible accomplice in the escape of two convicted killers over the weekend, a law enforcement source briefed on the investigation confirmed to CNN. The source would not comment on the extent of the woman’s involvement or the kind of help she may have provided.

Two inmates who used power tools to escape from the maximum-security wing of New York’s Clinton Correctional Facility must have had help carrying out the intricate plot, New York Gov. Andrew Cuomo said Monday on CNN.

“They wouldn’t have had the equipment on their own, that’s for sure,” he said of inmates Richard Matt and David Sweat, who cut their way out of the prison sometime after they were last seen at bed check Friday night.

Now, red-faced officials are looking for the two convicted killers, who authorities say used power tools to cut through the walls of their cells and crawl through a maze of underground pipes and shafts to freedom.

In their place, the pair left decoys to trick guards into thinking they were asleep in their bunks — and a yellow sticky note with a smiley face. It read, “Have a Nice Day!”

Despite a $100,000 reward and a manhunt involving some 250 law enforcement officials, Matt and Sweat — both serving lengthy sentences — were still on the loose Monday.

“They could be literally anywhere,” said Maj. Charles E. Guess of the New York State Police, which is leading the search. 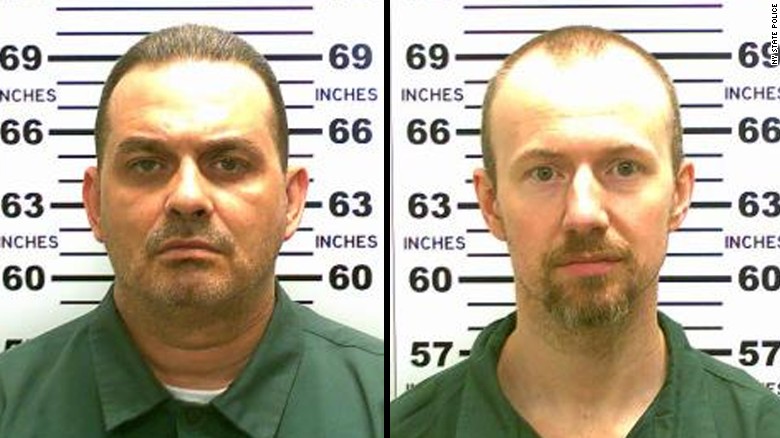 ‘They could be literally anywhere’

Guess said authorities do not know if the pair are still together, had help on the outside, or if they have access to a vehicle.

Although they’ve received more than 150 leads, Guess said Sunday that “they could be literally anywhere.”

In addition to the federal marshals service, the FBI is also among the some 250 law enforcement officials involved in the manhunt, according to Guess.

With the facility’s proximity to Canada, only 80 miles south of Montreal, and with one of the inmates having ties to Mexico, he said authorities on both international borders have been alerted.

Matt, who has “Mexico Forever” on his back, is well known to Mexican authorities. In 2007, he was extradited from Mexico back to New York on a decade-old murder charge, documents from the Mexican Attorney General’s office and New York State Police show.

Matt and Sweat apparently were last seen at 10:30 p.m. Friday during a standing count, authorities said.

Head counts are performed every two hours throughout the night when guards visually check to see whether inmates are in their bunks, Clinton Correctional Facility Supervisor Steven Racette said.

The escapees tricked the guards by arranging things in the bunks to look “like people were sleeping … with these sweatshirt hoodies on,” the governor said.

Once they were out of their cells, they then followed a catwalk “down an elaborate maze of pipes into tunnels and exited a series of tunnels at the manhole cover,” he said.

They evaded detection for some seven hours, until the inmate count 5:30 a.m. Saturday.

Exactly how they got the necessary tools remains a mystery, but Cuomo — who toured the escape route Sunday — said it was possible the tools came from workers performing regular maintenance on the 1845 facility.

Photo: In the cell of one of escaped inmates, looking at the hole cut in the wall as part of escape pic.twitter.com/tGAtt8xHyb

“It was elaborate, it was sophisticated,” he said of the plot. “It involved drilling through steel walls, steel pipes.”

Guess said the company who employs the maintenance workers was cooperating with the investigation.

Commemorating the first-ever escape in the facility’s 170 year history, the men left behind a yellow sticky note on a pipe, with the message, “Have a nice day!”

“These are dangerous people”

The facility, in the sparsely populated northeast corner of New York, is the state’s largest prison with a population of 2,689 inmates, the corrections department said. Clinton Correctional Facility’s nickname is “Little Siberia,” because of its remote location, in a region where wintry weather can persist for more than half the year.

“These are dangerous people,” Cuomo said. “They are nothing to be trifled with.”

Richard Matt is white, 6 feet tall and weighs 210 pounds. He has black hair, hazel eyes and several tattoos in addition to the “Mexico Forever” on his back, including a heart on his chest and left shoulder, and a Marine Corps insignia on his right shoulder. He was convicted on three counts of murder, three counts of kidnapping and two counts of robbery after he kidnapped a man and beat him to death in December 1997, state police said. He was sentenced to 25 years to life in prison.

David Sweat is white, 5 feet, 11 inches tall and weighs 165 pounds. He has brown hair, green eyes and tattoos on his left bicep and his right fingers. He was serving life without parole after his conviction of first-degree murder in the death of a Broome County, New York, sheriff’s deputy in July 2002, state police said.

Authorities ask anyone who sees them to call New York State Police or 911.