ENCINITAS, Calif. -- Authorities are asking for the public's help to identify and locate a man wanted in connection with grand theft by use 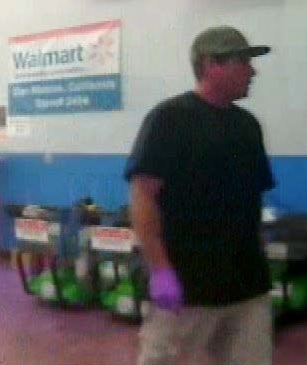 of a credit card.

On September 4, a woman who lives in the 2400 block of Oxford Avenue in Cardiff discovered that someone had stolen her purse from her unlocked car parked in her driveway, according to a press release from San Diego County Crime Stoppers. The purse held her wallet, ID cards, credit cards and checkbook.

One of the credit card companies alerted her that someone had attempted to use her card at a WalMart in San Marcos and that a purchase for $383 was declined. The suspect successfully used one of the stolen credit cards at a Shell gas station for $85.

The man is described as 5-foot-10-inches tall and weighing approximately 170 pounds. He had short dark hair and was last seen wearing a baseball cap, black T-shirt and tan shorts.

His vehicle is described as a dark-colored station wagon with a roof rack.