SAN DIEGO — A man who was 17 when he was involved in a shootout with a security guard during a botched marijuana dispensary robbery in which one of his cohorts was killed was sentenced Friday to 65 years to life in state prison.

A jury also found Bell guilty of attempted murder and two robbery counts stemming from a holdup at Illusions smoke shop on El Cajon Boulevard on April 21, 2014, and an armed robbery at the Greener Alternative marijuana dispensary in North Park four days later.

During that robbery, security guard Henry Smith fatally shot Thomas. Bell and Smith subsequently got into a shootout, and the guard was shot in the pelvis.

Defense attorney Patrick Dudley argued unsuccessfully that a 65-years-to- life sentence was akin to a sentence of life without parole, which is unconstitutional for a youthful offender.

But Superior Court Judge Lorna Alksne said Bell would get a full parole hearing in 25 years.

Alksne, who in June ruled that Bell was unfit for Juvenile Court, called the case “very troubling.”

“Never have I felt that there was any remorse,” the judge told the defendant.

Alksne said a sentence of 90 years to life plus 26 years — recommended by Deputy District Attorney Robert Eacret —  was excessive.

Bell was on juvenile probation for a “hot prowl” burglary when he got a gun and went on the crime spree at the smoke shop and marijuana dispensary, Eacret said. 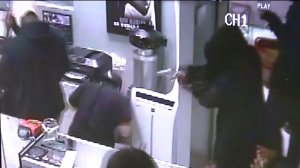 “This is a young man who had a complete disregard for human life,” the prosecutor said.

Authorities said Bell and Thomas — wearing masks and hooded sweatshirts — burst into the Illusions smoke shop and confronted the owner. The suspects were looting a small office when another Illusions employee — unaware that a robbery was underway — yelled out, forcing the robbers to flee.

Before leaving, Bell fired a round at the owner, just missing him, Eacret said.

Four days later, Bell and Thomas stormed into the Greener Alternative marijuana dispensary, where they were confronted by security guard Smith, working his second day on the job.

Three weeks after that robbery, detectives tracked Bell and co-defendant Jonathan Collins to a motel room in the Los Angeles area, where they were arrested.

Atiim Smith pleaded guilty to being the getaway driver and was sentenced to eight years in prison. Collins pleaded guilty and got 12 years behind bars.

What To Eat To Beat The Heat

Tips For Cutting Back On Subscription Spending

Body Found In Trunk Of Car