SAN DIEGO – Steve Fisher, who is credited with breathing life into the San Diego State University men’s basketball program and making the team a conference and national power, announced his retirement Tuesday.

The San Diego Union-Tribune reported Monday that Fisher has decided to step aside after 18 seasons. 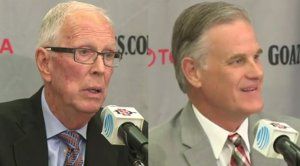 “Steve Fisher is a legendary coach,” Faulconer wrote. “Thanks Coach Fisher for transforming SDSU basketball and leaving behind an incredible legacy.”

Fisher took his teams to eight NCAA tournaments during his tenure and won the Mountain West Conference regular season championship 10 times. He took his team to the Sweet 16 in the 2011 NCAA men’s basketball tournament, losing to eventual champion Connecticut.

Fisher previously coached at Michigan, guiding the Wolverines to the NCAA championship in 1989, just weeks after the firing of coach Bill Frieder, who had accepted the coaching position at Arizona State just before the NCAA tournament began.

Fisher was eventually fired by Michigan amid an investigation involving a team booster. He was an assistant coach for the NBA’s Sacramento Kings for a season before his hiring by SDSU.