The pursuit ended in the Whitewater area around 1:40 p.m., more than three hours after the San Bernardino County Sheriff’s Department received a report of a stolen truck in Barstow, according to Los Angeles Times.

The incident began when the San Bernardino County Sheriff’s Department noted a semi-truck stolen out of Apple Valley around 10:30 a.m., according to a CHP official. CHP took over the pursuit once the big rig headed onto Interstate 15, KTLA reported. 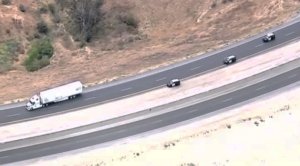 It moved from I-15 to state Route 60 and eventually to the eastbound Interstate 10, the official said. By 12:40 p.m., the driver was nearing Palm Springs as at least three CHP vehicles followed behind it.

Around 1:30 p.m., the helicopter video showed the driver on the southbound SR-62 near Morongo Valley.

Less than 10 minutes later, the driver pulled over at a rest stop in Whitewater, got out with his arms over his head and appeared to surrender to officers. He was placed in handcuffs.

The semi-truck appeared to belong to ACTenviro, which helps businesses with their “hazardous waste and environmental management needs,” according to the company’s website.

The company has posted a statement on their website, which read, “One of our trucks was stolen last night in Southern California. We have tracked it and law enforcement is in pursuit. We have been working with all relevant authorities and will continue to do so.”

The driver of the stolen big rig told CHP officers that he didn’t want to hurt anyone and claimed to be unarmed. The driver seemed to obey traffic laws.

At one point, the man suspected of stealing the big rig spoke with CHP, telling them he “didn’t want to go back to jail,” according to the Times.

It was not immediately clear whether the driver was arrested, or what charges he could possibly face. Authorities have not released his name.